Because for some reason, I thought it was a good idea to load up my kids and go to the grocery store. But not just any grocery store, Trader Joes. Now, let me be clear. I LOVE Trader Joe’s. If you don’t have on near you it’s a wonderful neighborhood grocery store with amazing food and drink from around the globe and around the corner. When my kids were little – wait, they’re still little, but like, really little, cart bound “little” – TJ’s was the best. We’d walk into the store and there was always a beautiful buffet of bananas welcoming us. We’d toss a half dozen or so in the cart and then I’d hand each of my kids one. I mean, I always paid for the bananas later, but I think the produce lady at Ralph’s doesn’t trust that I’m actually going to pay….No such problem at Trader Joe’s. No one there threw us shade for sampling the product as we strolled through the produce section.

The banana usually lasted through produce and fresh meat, and then we rounded the corner and it was time to start looking for the Bixby Beagle. Now, I won’t tell you how long it took me to realize that the Bixby Beagle isn’t a fixture at all locations, despite it being named after my neighborhood, so I don’t know what the dog is called where you live – or if it even IS a dog – because I just learned it could be any animal, but I love that dog. Because it gives my kids something to DO for the next little bit. As I meander through the frozen foods, my kids have their eyes peeled for that beagle. Because when we find it? They get a lollipop! A nice fresh, not-covered-in-lint-because-I-found-it-at-the-bottom-of-my-purse-while-hunting-for-something-to-calm-the-storm-brewing-in-my-cart lollipop.

We can usually make the lolly last until checkout at which point my kids get to try to entertain the checker, who then HANDS THEM A MILLION STICKERS. It’s like Willy Wonka’s factory over here when they start unraveling the giant roll of seasonal stickers. Sometimes, they’re even scratch ‘n’ sniff. My kids think every day is Christmas at Trader Joe’s.

But then my kids got older. And they got wise to the fact that there are ADORABLE tiny little carts that are just their size! First the bananas, then the lollipops, then stickers – clearly Trader Joe’s was catering to their VERY specific needs. So it should have come as no surprise to me when Cole told me that “Uncle Robert” got him his very own cart too! This will teach me to pretend that the manager of the grocery store is related to us.

For a while, things were okay. Cole was the biggest and somehow Evie just accepted that she still had to ride in the cart and Cole was allowed to push his own. And he did surprisingly well. He took his new responsibility seriously and I think he could smell the fear on me and knew he was one bruised shin away from having his rights revoked.

Then I started getting wise. I started getting organized. And for the love of God I started going to the store while Cole was in preschool. Going to a store with a 2 year old and a baby only feels easy when you’re used to having a 4 year old there too. I had gotten so used to the chaos of all three that two felt like a breeze! It was like old times! And that’s when you start to make mistakes. You get sloppy. You decide to let the two year old give this whole tiny cart thing a try. You think this is your new normal, not remembering that there will come a time when you will have to go to the store again with all three kids, but by then, it’s too late. By then, you’ve created monsters.

Which is how I ended up as the caboose in a crazy choo choo train of tiny cart insanity. To those we ran down, I apologize. To those that looked at me like I’m crazy, yeah, you’re probably right. To those that muttered something under your breath like I couldn’t hear you, I could. I’m not even saying I disagree with what you said, but I heard you bitches, okay? To those that seemed entertained by us, thank you. And to those that gave me a look of, “Hell yeah, mama, you got this!,” a huge, huge, thank you. It was because of you that we made it. Because of you that I didn’t give up in the pasta aisle, just lay down on the floor and cry, and just GIVE. UP.

Instead we pushed on. Ate a banana. Found the beagle. Got our lollipops. Grabbed some stickers for the road. And got the F OUT OF TRADER JOES. 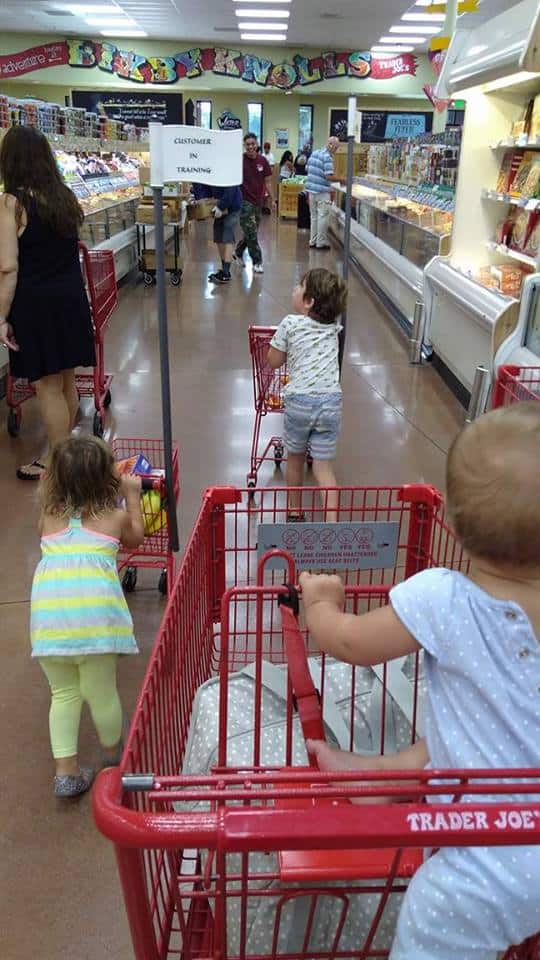