Your child is getting older, and they’re learning more and more everyday. As they get closer to preschool, you’ll probably start to wonder- when should a child learn to write their name? And how do you teach a kid how to write their name anyways? We’ve got the best name writing activities for kids here at TheSaltyMamas.com.

According to family legend, when I was one and a half and my sister was three, my mom needed to get us out of her hair for a while. At the end of her rope, she sent my sister out of the room with me, telling her to teach me to write my name. She figured it’d buy her a few minutes, at the very least.

And if you believe her, an hour later, I came out able to write my name.

So when my kids were toddlers, I really thought it was as easy as that. You show them their name. Then you tell them to write it. Then you’re done.

If you and your kids are anything like me and mine, you’ll likely know by now that it’s not usually quite that simple. There are several stages to figuring out how to teach a kid to write their name, starting with the very basics and moving on to independent writing.

Here, we’ve got a collection of fun name writing activities for preschoolers (or toddlers, if your feeling ambitious) that will have them writing their names in no time.

Well, like normal levels of “no time.” Not like “family legends of one year olds writing their names” no time. But you know what I mean. 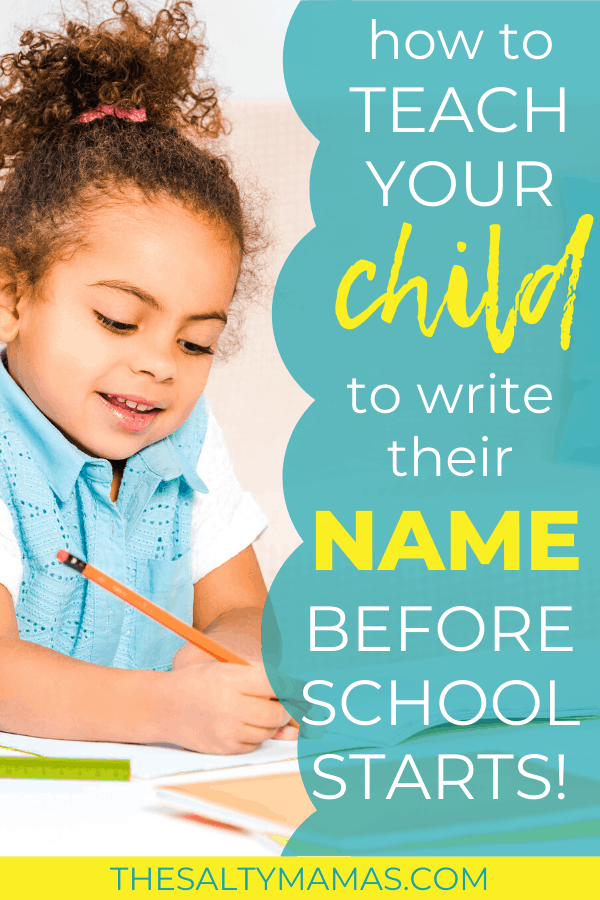 This post contains affiliate links. You can read more at our disclosures page. Thank you for supporting The Salty Mamas!

When Should a Child Learn to Write Their Name?

While you already know my mom’s opinion on this, we’ve found that developmental experts have something very different to say. Kids as early as age one should begin handling thick crayons, pencils, and markers to begin making markings on paper (and hopefully not your walls). 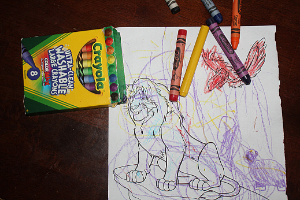 Kids ages 4 and up can typically copy squares, triangles, and “x”s. When your child can do this, it’s a sign that they may ready to learn to write their name. Their fine motor skills and legibility should improve through ages 4 and 5, and most children will be able to write their name by age 6. 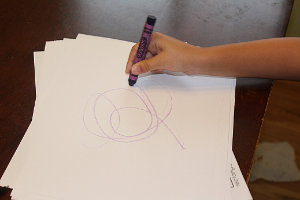 As a teacher, however, I can tell you that it is EXTREMELY helpful if kids know how to write their name by kindergarten, or by preschool if possible. If your child isn’t there yet developmentally, do not push them to do so. It’ll only cause you (and them!) more stress in the long run.

However, if your child is showing signs of readiness and an interest in writing their name, there are tons of low-stress ways to begin to teach your child to write their name as early as three years old.

Related Post: How to Teach Your Toddler (or Preschooler!) to Read

What Are the Signs That a Child Is Ready to Write Their Name?

According to GettingReadytoRead.org, there are several ways to tell if your child is ready to begin writing their own name. A child who is ready to learn to write their name should be able to-

How to Teach a Kid to Write Their Name

Step One: Expose Them to The Letters in Their Name

Letters on the Wall

Each of my kids has their name on their wall, using fabric-covered chipboard letters. The original purpose was purely decorative, but as the years wore on, I realized it was a great tool for teaching them to write their name. 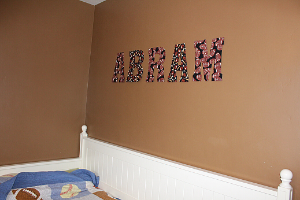 At least once a day, we point out their name on the wall. We touch each letter as we say its name “A-B-R-A-M.” It’s an easy, no-fuss way to practice spelling his name on a daily basis.

Putting their name on EVERYTHING will help not only with name recognition, but also with not losing all the things. I use my Cricut to cut vinyl labels (get your own in our product shop) for the kids’ water bottles, Bentgo boxes, and more. 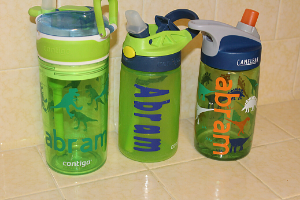 Every time he takes a drink or opens up his lunch box, he sees his name. Over time, he learned to recognize it without much additional prompting from me.

Start exposing kids to the letters in their name from an early age using name puzzles. You can get custom wooden puzzles made on Amazon (such a cute third birthday gift idea, too!).

Trying to go a little lower budget? Cut squares from different colors of construction paper, and write one letter of their name on each piece of paper. The colors will give them cues to make spelling their name easier when they’re just getting started. 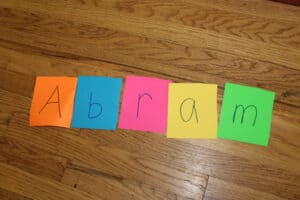 As they get better at it, swap out the cards for plain white paper. See if they can put their name together without the added support of the colors.

One of the best ways to teach a child to write their name is to practice spelling it aloud, early and often. Spell their name aloud every time you see it in writing. Every once in a while, I even spell my kids names out when I’m calling them- think, “hey L-I-L-A! You’re breakfast is ready!”

You can even come up with rhymes or songs to help them remember. We spell Abram’s name to the tune of JoJo Siwa’s “D-R-E-A-M” song (because little brother problems), but you could easily swap out the letters in B-I-N-G-O or come up with a tune of your own.

Write it for Them Often

Whenever Abram makes a picture, writes a card, or is playing with chalk, I take the opportunity to label his drawings with his name. I’ll narrate it aloud as I do it “I’m going to write your name on your picture so everyone knows who made it. I’m going to write A, B, R, A, M. Because that spells Abram!” 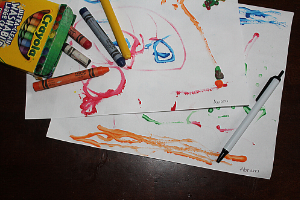 Modeling for them how to spell, and write, their name is great practice for the time when they’ll eventually be able to write it on their own.

Color in Their Name

Write their name on butcher paper in block or bubble letters, and have them color it in with crayons. Or write it smaller, on a piece of construction paper, and have them paint it with a paint brush. 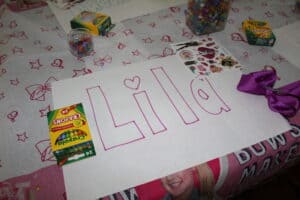 Keep it light, keep in fun, and keep it focused on learning to recognize their name while getting in extra fine motor practice.

Teach Them “Their” Letters First

The first letter I ever taught Lila was a capital L. It’s out of the traditional order, sure, but kids love to take ownership of ANYTHING. She would get huge pride in finding “HER” L everywhere we went.

By the time it came to teach her how to write her name, she already had to image of an L imprinted in her mind, making putting it down on paper that much easier.

Start with the capital version of the first letter of their name, and point it out everywhere you see it- in books, on signs, on papers you see. Once they’ve mastered the first letter, move on to the other letters in their name until they can recognize all of them. 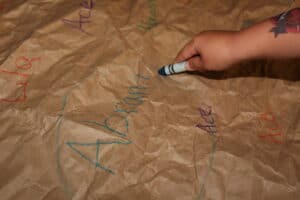 However, you don’t necessarily have to wait for them to know all their letters before teaching them to write them. Feel free to skip ahead to name writing practice as soon as your child’s fine motor skills have improved enough to allow them to do so.

First, a note on writing instruments- kids will use a more functional grip when the writing instrument is short, and reasonably thick. (If you’re not sure, this site is great for learning more about a functional pencil grip.) Consider purchasing a special pack of crayons or early-years pencils for kids to use to write their names. 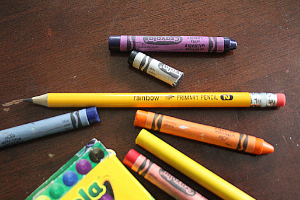 This will help to ensure that you are teaching a functional grip in the early years, hopefully avoiding the need to correct it later on.

Instead of asking a preschooler to write their whole name, write part of each letter and ask them to “finish” it. For example, when Abram first started writing the letter A, I would form the two slanted lines, and he would simply draw the line across the middle, like so- 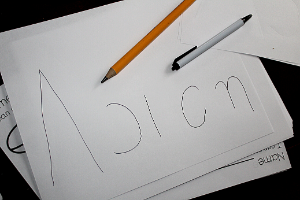 When he first learned to make his lower case b, I would draw the semi circle, and he would draw the line down the left hand side to “finish it,” as pictured below. 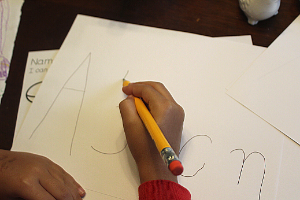 It’s a low-pressure way to practice writing the letters, while also getting increasingly familiar with how the letters are formed. It’s a lot less stressful for kids than being asked to write their whole name at once (and, if you make enough of a game of it, it’s a lot more fun, too).

Write One Letter at a Time

When your child is first learning to write their name, it can seem overwhelming to them. Consider asking them to write just the first letter, and then you’ll write the rest. This is particularly helpful if you are teaching kids to write a long name; the Elizabeths and Nehemiahs of the world are likely to have a harder time than the Avas and the Bens.

Related Post: 10 School Readiness Skills (That Have NOTHING to Do with Academics!)

Step Three: Teaching a Preschooler to Write Their Name

Start Big, and Then Get Smaller

If you’ve ever met a preschooler, you’ll know that their bodies were made to do BIG things in the early years. Running, jumping, climbing, and moving their arms in BIG ways comes naturally to them.

Don’t fight this impulse. Practice writing their name BIG, on full sheets of construction paper or even on butcher paper, in the stages of name writing. Over time, you can give them smaller pieces of paper to write their names on. But for now? Keep it larger than life, just like them.

When you first start teaching your child how to write their name, consider having them trace it. You can write their name on a large piece of paper with a highlighter, and have them write over it with a pencil.

You can also have kids “rainbow write” their name, tracing the same highlighter with all of the colors of the rainbow for extra practice. 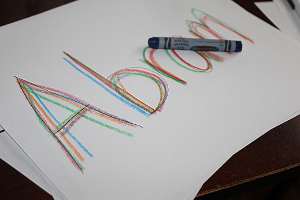 You’ll find that solid lines are easier to trace in the beginning (light gray lines, or highlighter). Then you can move onto to dashed or dotted letters (there are great customizable name worksheets available at A to Z Teacher Stuff).

Copying from a Model

Kids can also practice writing their name by copying from a model. Write their name on an index card, and have them use it as a guide to help them write it on their own. Bring the card out anytime they need to write their name for extra support. 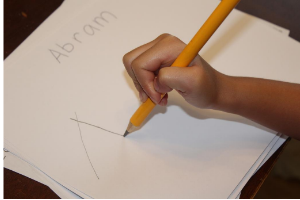 Writing on Their Own

The last stage of learning to write their name is to write it independently, all on their own. They can sing their name song, recite the letters out loud, or just use muscle memory to complete it.

Related Post: Get Kids Learning with These Colorful Activities

Let’s face it, most kids aren’t going to learn to write their name at one and a half years old (pretty sure that, in spite of family legend, I didn’t either). But with some creative name writing activities and a lot of practice, you’ll be able to teach your child to write their name in no time at all.

Looking for more fun ways to help your child learn? Head here next-