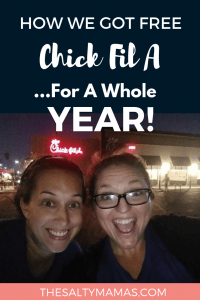 When we first heard there was going to be a new Chick Fil A opening near us, we immediately began praying that they would have a playplace. And free WiFi.  When we found out they would have both, we were way more excited than we should be.

But then we found out there was going to be a Chick Fil A First 100 campout, according to Chick Fil A company tradition. The day before a new Chick-fil-A opens, there is a twenty-four-hour celebratory campout. There are tons of giveaways, activities, free food…oh, and sleeping in a parking lot. But when we realized that in the end, the Chick-fil-A First 100 campout guests would get free Chick-fil-A for a YEAR (Read: One #1 combo a week for the next 52 weeks)? Well, there aren’t enough words for all the feelings.  Needless to say, we went.

So how did it go? Well, we slept a little, ate a little, and laughed til we snorted. And because we KNOW you’re dying to know, here’s a play by play of our overnight campout at the Chick Fil A First 100 campout event.