Things you should know about me:

Now sure, most of us do, but I’m brave enough to admit that I can be kind of, well, obnoxious about it. I’m also incredibly stubborn. I know, it’s an incredibly attractive combination ain’t it? But I try, oh how I try, to not say, “I told you so.” Especially often. Especially to my husband.

Lucky for me, said husband is also phenomenally stubborn, so we’re really two peas in a pod. He also is one of those delightful people that has to learn things the hard way. There is no amount of talking that will convince him that his way is not the right way.

So while I fretted about our trip to the cabin for weeks, he quickly dismissed my concerns, telling me not to worry about it. We were going with some of his family, and the quarters are somewhat cramped. I asked him repeatedly to make a couple calls to find out what the sleeping arrangements were. I do better being able to visualize where I’m going to sleep, where my kids are going to sleep, and depending on their proximity to me, how much alcohol to bring to survive.

He said we’d figure it out when we got there and it wouldn’t be a big deal. I took a deep breath, and chose to trust him.

I was worried about my husband’s expectations for the week…he wanted to take Cole fishing. He wanted us to go on a family hike to the Wishbone tree – a 45 minute hike each way. He wanted us to stay up and cook s’mores and share his love of the great outdoors with our kids. I worried about the record breaking river levels and it’s speed. I hate hiking and was skeptical our 2 and 4 year olds would be up for the trek. I warned that if we let them go too many days without a nap and staying up late they’d turn into actual literal monsters. They may grow horns and extra eyes, I don’t know, I just know that it’s not advised to try.

He thought I was just being negative.

He grew up at the cabin. He knew what he was doing. I’d see.

Now this is where you have to decide, dear reader: Which of us stubborn ass people won the day and got to be right?

.Have I built up enough suspense??

Okay, I won’t make you wait any longer…..

That’s right. Me. This is NOT one of those posts where I realize that my kids are lovely, that my husband is capable and thoughtful, that I just need to take the road less traveled and be brave and bend the rules and not be such a rigid, negative, naggy B of a wife.

No, this is a post where the moral of the story is TRUST YOUR INSTINCTS!

Because here’s what happened our first night: The baby was asleep, a minor miracle with all the excitement of a new place, the kids were just finishing up a movie, their beds set up, and we had almost made it to bedtime. And then it happened: My husband’s Aunt and a carful of teenagers pulled up. They came in the house, guns of excitement blazing, woke up the baby, amped up the other kids and killed any chance my husband had of being right.

We had arrived first and taken the “Master” room, as it was the largest room and we, the largest family. But apparently that room wasn’t to stay ours for long and we had to cede it to the Aunt who basically complained until we gave up. So then we had to move the beds – the ones we had set up for all three of our kids, shown to them, explained how this was the place they’d be sleeping, etc. – to the other, much smaller, room. The teenagers were to sleep in the attic via a ladder. A ladder that the teens had to go up and down one hundred thousand times in the first seven minutes of being there. A ladder that is VERY enticing to 2 and 4 year olds. 2 and 4 year olds that are supposed to be going to sleep even. Especially?

Three hours later, we had the baby back down and the other 2 were wavering between complete and total exhaustion and an undeniable desire to be outside around the campfire with their cousins. A delightful combination let me assure you.

The first morning went a little better…because pancakes are generally a uniting force no matter your age or how much sleep you got the night before.

And then we hiked. 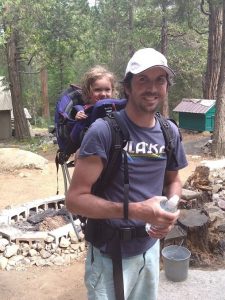 We slathered on sunscreen and deet, I put the baby in her carrier and we put the 2 year old in the hiking backpack. Off we went! And everyone LOVED it.

For four minutes. We got hot, but we trudged on. The kids got heavy, but we trudged on. We got hungry and THIRSTY, but we trudged on. And then we found a GOD DAMNED ROTTING MOUNTAIN LION CARCASS. We did not trudge on. Cole burst into tears, and stubborn Daddy started to crack realizing this whole thing was a terrible mistake. I may have never loved him more than when he latched onto the giant dead animal on the trail as an excuse to turn around and head back.

As we walked back Daddy said, “Well, you’re a trooper.”

“And this has been kind of a mess.”

“And it’s been a lot harder than I thought it was going to be.”

“And you were right.”

God, I love to be right. But sometimes I really wish we didn’t have to live out all the wrong to get to the right… 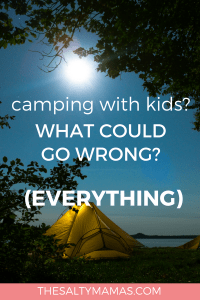