Before having kids, I was firmly on team “We are NEVER Going to Chuck E. Cheese.” Then we were invited by my #Momsquad and the kids feel deeply in love and I knew my Chuck-Free days were over.

We found ways to manage our trips, save some money while we went, and eventually Chuck E. Cheese made it’s way to become a regular activity in our rotation.

So when my husband started saying, “Wow, you go to Chuck E Cheese a LOT these days!,” I found myself trying to justify our outing. At first, I thought I was just trying to make it seem less pathetic that we went there so often, but then I realized that my son really was learning some valuable life skills. So now, I have zero guilt about living at the air-conditioned paradise that is Chuck E Cheese this summer.

And you can too! Just use these little life lessons next time you go with your kiddo and you can mark it down as a practically educational opportunity! 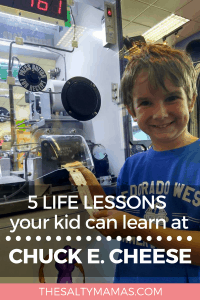 The last time I went to Chuck E. Cheese I went with my five year old alone. Knowing I wouldn’t have to be wildly chasing multiple kids in multiple directions, we ended up buying a one hour all you can play pass instead of the traditional tokens route. It was actually quite freeing for me to not be in charge of how long we stayed or how many games we could play.

It also gave my son the opportunity to learn about how to manage his own time. He often asked how many minutes we had left and (surprisingly) used his time wisely when deciding what to do next.

He started thinking about how much he liked certain games, or the little rides, and which ones he wanted to do more. And he also realized that since he was on a time crunch he should waste no time and boy did he hustle to the next thing he wanted to do!

And really, what is time management if not learning that sometimes, you just gotta hustle!

All it takes is one time for my five year old to see another five year old hit the jackpot and the reality of this old staple sets in. Of course, MY son wants to win the jackpot! He wants to feel the thrill of victory as endless tickets fly out of the machine.

So it falls on old Mom to explain to him that it’s a crapshoot. That it’s just luck. And that the kid that won doesn’t have to share his tickets with you.

So yes, you’ll probably walk out of here with a plastic spider and a lollipop while he leaves with a giant stuffed animal, but that’s the way the cookie crumbles buddy. As he sulks with his meager collection of plastic, I’ll pat him on the shoulder and say, “Life’s not fair, buddy. We can try again next time.”

Related Post: Laugh Your Way Through the 10 Levels of Parenting Desperation

The Early Bird Gets the Worm

Have you ever gotten to a Chuck E Cheese right when they open? Because we have! And while this is maybe not the world’s best lesson to teach your kids, here it is: When you’re one of the first people to get to Chuck E Cheese you can score some serious free tickets.

See, the employees go around testing the games just before and after opening. And they just leave the tickets with the games! So you can casually stroll through the arcade picking up some bonus tickets along the way.

Now maybe this also teaches that you can get something for nothing, but let’s focus on the good stuff. Teach them to be calm, to walk slowly from game to game, and to not hog all the tickets if there are other kids there. But also? That kids that get there later don’t get the free tickets.

Be on time kids. It pays off. Sometimes in tickets you can redeem for cheap plastic you don’t need. But still.

When we don’t go the “All you Can Play” route, we’ve got the card loaded with credits. Admittedly, this used to be a lot easier when we had physical tokens, but you can still make it work! Most games are one credit (though a few locations we’ve noticed have snuck in a few two credit games).

Because I’m a bit of a cheapskate, there will be no refills to your card. What you start with is what you get, so use the credits wisely! My son has learned how to spread his credits out amongst the games he likes, and that when they’re gone, they’re gone.

The good news is, when game play is done, there’s another opportunity to teach about budgeting. What was once the bane of my existence, is now a fun (ish) learning opportunity.

Yes, I’m talking the dreaded ticket redemption counter. My son gets to spend his tickets however he wants – whether that means using them all on one item, or buying lots of smaller ones.

And Mommy gets to wonder, “How many new little plastic toys will I find around the house this week?” See? Fun for the whole family.

Inevitably the fun with come crashing to an end and we will have to leave. While we try to soften the blow with the aforementioned trinkets, it doesn’t always help much. Cole would always like to stay for “just five more minutes” or play “just a few more games.”

And though I may want to give in sometimes, I know that it will kick me in the butt later. Because kids remember everything that ever happened in their favor. (Or, let’s be honest – against them). And they will remember the moment you caved to their whining until the end of time.

So instead, talk to your little one about how to deal with disappointment. Talk to them about something that’s happening later that they can look forward to. Remind them that you can come back another day, just not today.

Tell them that it’s okay to be sad about something fun being over. You can even try to tell them something motivational like, “Don’t cry because it’s over, smile because it happened!” (Fair warning though? My kid thought that life advice was some pure BS. So be prepared).

Whatever it is, talk them through it, give them a hug, and let them know it will be okay.

And you’ll be okay too, since you survived another day at Chuck E Cheese. Way to go, Mom!

So see, a day at the Chuck isn’t ALL bad. Your kiddo will have some fun, and even learn a thing or two in the process. And hey, if nothing else, it’ll have taken up an afternoon. And that counts for something!