Recently, as part of the Regal Kids’ Summer Movie Club, we headed to the theater for a cheap showing of Sing. I don’t know about you, but I tend to use my kids’ TV time as get-as-much-work-done-as-possible time, so I’d never actually seen the whole movie. Sure, I’ll get down to the part where Meena rocks out at the end, but otherwise, I come and go throughout. Not this week.

This week, I was forced to sit and watch as Mama Pig Rosita sat there on the screen, strumming my pain with her fingers for a full two hours (no really though- what’s with that crazy dull stretch three quarters of the way through the movie? It took SO MUCH POPCORN to keep Abe occupied during that part).

If you are a Stay at Home Mama, then you might have noticed before what I am just noticing now- Rosita the Mama Pig is ALL of us. 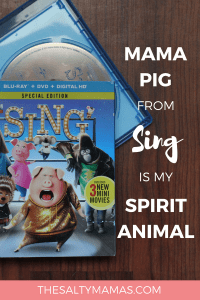 There’s no doubt that mamas are important- but the work we do day in and day out can definitely get repetitive. Like, the kind of repetitive where you could build a machine to do it. Being a housekeeping robot can wear on a person over time.

Mama Pig is largely a background employee in her own life. Because a ROBOT COULD LITERALLY DO HER JOB. Was no one else disturbed by the fact that it took WEEKS for her people to even notice she was gone?!? As long as the work was getting done, no one noticed.

As soon as that robot glitched out, though, they were calling for mama.  Because no one realizes how much work you are doing until you aren’t doing it anymore.

She Used to Be Smart Once

Don’t get all salty with me yet- she’s still smart! She just doesn’t get the chance to prove it that often.  But clearly, she’s some kind of engineer. I mean, how else would she build a housekeeping robot in a single night, or draw up the plans to construct a full building?

Nah, Rosita is a genius, and I bet it felt darn good to use those skills again.

She Ditches Her Kids Sometimes

Did anyone else throw up a fist when Rosita drops a kid in her husband’s lap and runs out the door? No? Just me? Sometimes, you need a break, and you’ve gotta get that break however you can get it.

And THAT’LL teach the husband about how hard it is to parent TWENTY FIVE KIDS all day.

She’s Trying to Have it All

Mama Pig just wants some BALANCE, yo.  She loves her kids. She wants to take care of them. But she also wants to SHINE. It’s what we all want- and what we are all usually failing at.

She Wants to Be Fabulous

I mean, it’s gotta be dull wearing that same pink button down every.single.day. (Although, kudos to you Rosita. I barely get dressed half the time).

But at some point, you’ve got to let your hair down- or jam it all into a skin-tight-sparkly-black-hat, whatever floats your boat- and remember that baby, you’re a FIREWORK.

I was trying REALLY hard not to get mad at Papa Pig during this movie. Clearly, he’s going through some things. Work is kicking his butt. He goes to work before anyone else leaves the house, and is home after the kids are in bed. He has a terrible meeting, and doesn’t even have the energy to finish his pie. And that sucks.

But it is also not easy to be the one picking up the slack. All those meals for a million children, and all the housework, and all the childcare, and all the logistics involved when somone gets sick- that all falls on Mama Pig. And THAT sucks, too.

But because I just can’t with sad storylines, I choose to believe that this is a temporary thing. Papa Pig is trying to land a big client, so it’s a few weeks of extra work. He’s going to get some comp time next week and will watch the kids while he sends Mama Pig to the spa with her MomSquad.

Shut up. That’s my story and I’m sticking to it.

She Has a Favorite Kid

Did you notice that little Casper gets a LOT more love and attention than the other kids? I mean, squeaky wheel and all that, but something tells me if Carla had the fever, she’d be shipped off to school for the day.

I mean, I don’t have a favorite child. How dare you imply such a thing. And I will never tell you which one it is. Hypothetically speaking.

She’s Got to Shake It Off

It’s SO easy to get the doldrums as a Stay at Home Mom. There is so much joy and laughter and cuddles, and it is meaningful work that we do. But that doesn’t mean it doesn’t get boring sometimes. We’ve got to get our kicks in where we can- like that epic solo trip to the grocery store we’ve been dreaming about.

via GIPHY
And I may not be “Shaking it Off” on stage in front of thousands, but can I dance my way through folding some laundry? YES. I. CAN.

…When it Matters Most, Her People are There for Her

We can be surrounded by chaos, fatigue, and loneliness, but at the end of the day, our people show up for us. They love us, they think we’re funny and pretty and that we are STARS.

And when push comes to shove, those hugs and sweet lispy “you’re the best mama evers” (and let’s face it, some steamy kisses from our partner) are enough to get us through even the toughest of days.

So are you with me? Are you living that Mama Pig life? Tell us which character you related to the most in this movie (unless it’s Pipsqueak- you’d best just keep that one to yourself).

3 thoughts on “Sing’s Pig Mama is Every SAHM, EVER.”