Being home with my kids is a blessing.  I know it. Most days, I’m grateful. Most days are fantastic. And then there are those OTHER days. The days where you’re bored, and the kids are bored, and everyone is just a little bit off. The fact that the day is SUPPOSED to be a blessing somehow makes the whole thing worse, and you find yourself with a case of the Mondays on a Wednesday morning.  The toddler schedule isn’t working, you’re not the fun and funny mom you usually are, and you’re questioning your ability to actually parent these tiny little monsters. You start to spiral, and then decide that, come Hell or high water, this day will be salvaged. You will BEAT these stay at home mom problems. You pour yourself a cup of coffee, take a deep breath, and begin your journey through the various levels of parenting desperation.

You’re a little bit tired, and the kids are begging you for TV. You don’t generally like to start with the TV this early, but what the hell. It sounds a lot easier to give in than to fight with them about it for the next hour and a half. Paw Patrol it is.

You realize at this point that your kids seem bored with the TV. You decide that you are going to be the cool mom for a minute, and break out the Arts and Crafts. Pretty soon you are swarmed with crayons, half-dead markers, and those God-forsaken self-inking stamps. You know you’ve made a huge mistake, but you have no choice but to see this glue stick and pom-pom debacle through to the end.

You decide to throw your kid a bone and play pretend with them. You grab your coffee and settle in on their bedroom floor with a Barbie doll in hand. They’ll take over “the game” completely, move all the dolls themselves, and do all the voices (or tell you EXACTLY what to say, in paragraph form, and require you to repeat it).  Basically, you’ll sit on the floor playing the role of either a mute or a parrot, trying to beat off the stay at home mom funk that’s creeping in by drinking increasing amounts of caffeine. And no matter how long you sit there, your kid will insist that you JUST started playing and cry when you tell them it’s time to move on to the next thing.

This sounds like a nice idea! Some fresh air, a change of scenery.The toddler schedule says that it’s time to go outside and play, so you’re gonna make it happen. Except your daughter will want to take her new double doll stroller, and your two year old will want to ride his scooter there.  So it will take you about 4 hours to get there. They’ll play for a minute, tell you they’re bored, and ask you to carry them (and their stroller. and their scooter.) home. 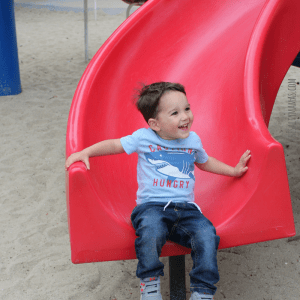 With thoughts of Betty Crocker and June Cleaver running through your mind, you’ll decide to take on a baking project.  Wouldn’t it be fun to bake cookies together? You’ll get out all the supplies, pop your children in the learning tower, and let them help pour in ingredients and turn on the mixer. After a few eggshells and one lick too many, you’ll give up, send the kids to their room, and eat all the cookie dough in teary silence.

You’re hungry. They’re hungry. You’re fussy. They’re fussy.  You debate the thought of putting together some sandwiches for a hot second, and then decide to head to Chick-fil-A. If you’re in luck, you can even find a funny mom friend to come along. It’s free-ish, so it won’t destroy your budget, and the kids will willingly hop in the car for some delicious chicken and waffle fries dipped in ranch. There’s potential for it to go wrong, but the lure of the play area and limitless Cherry Cokes are enough to convince you that THIS will be the way you turn this day around. 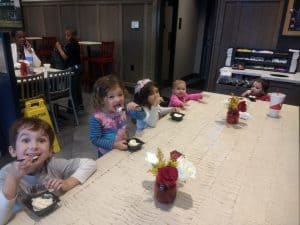 The Play-Doh, oh GOD the Play-Doh.  Now you know you’re REALLY desperate. You have a choice to make- do you get out the ten tiny canisters, only to see them quickly turn into a giant brown glob? Or do you step up your game and try to convince the kids that helping to make homemade playdough is part of the fun? Either way, you soon have playdough on your hands, the table, and -oh my goodness WHY?!?- in the carpet.  If you’re lucky, this will have bought you an hour, and if you’re not, you just got all that mess for ten minutes of entertainment for the kids. You sob as you try to mush that Play-Doh back into its cans (container colors don’t matter anymore, because THE PLAY-DOH HAS NO COLOR).

You call in reinforcements, with visions of the kids playing nicely with the neighbors in the back yard. Instead they want to play inside. And by play inside, we mean take every single toy out of every single bin without playing with it. If you’re REALLY lucky, they’ll play your daughter’s favorite game, which she calls “Moving.” It means that she’ll pack everything she owns into bags and boxes, carry them to the living room, and unpack. She’ll soon tire of the game, but refuse to move anything back to “the old house.” She and her friend will decide they want to play outside, but not in the fenced-in back. In the front yard, where you’ll need to watch them closely until the neighbor’s mama calls her home.

Because you can’t. You just CAN’T. You’ve been parenting your butt off, and you just.need.a.break.  If you’re lucky, the suggestion of TV will be enough, but if it’s not, you’ll find yourself in the very-awkward position of promising your kid a lollipop if they’ll just sit there quietly and watch a friggin show.  It will feel a little icky, and may even spoil the short break you get from it anyways, but at least it’s a stretch of time you are not responsible for planning.

Well if we’re going to be this miserable at home, we might as well be miserable somewhere the kids will think is awesome.  You decide to go big, and take the kids somewhere REALLY fun. Maybe it’s the aquarium, the kids’ indoor playground, or if you’re feeling crazy, you’ll head to Chuck E. Cheese. It won’t be any better than being at home, but it can’t get any worse. Probably. Maybe. But at any rate, your kids will think you’re AMAZING for taking them somewhere so cool, and the day will be salvaged.

How about you, mama? What do you do when you’re DESPERATE to turn the day around? Tell us in the comments below!