Part of parenting is realizing that there are 43,000 potential activities you can enroll your child in. The next critical part is realizing that time is finite and you really need to pick two or three of them and say no to everything else. As such, we’ve spent the last five years having discussions with our kids about what interests them, where their talents lie, and how they want to spend their time. Last year, our then 2 year old proudly declared that she wanted to do “ballallet.” Inside, my heart SOARED with joy as I pictured her following in my less-than-comfortable toe-shoed footsteps. Outside, I kept it simple, “Sounds good baby!” And so we waited for her to turn three to enroll in the nearby ballet studio.

Fast forward to last month, as we drove by the studio and my son said sheepishly, “I wish boys could to ballet.” I nearly slammed on the brakes as I found his sullen face in my rear view mirror and said, “Well of course boys can do ballet!” Still quietly, but with a tremor of hope, he replied, “Really?” I assured him they could, which prompted a follow-up question: “Okay, but do they have to wear pink?” Which is when I realized this was going to be a very long conversation. Over the next several days we discussed boys and ballet from lots of different angles.

So if you have a boy that’s interested in ballet, you may have to tackle some of these as well. Here are the top five things we had to address before my son was comfortable with signing up for ballet. 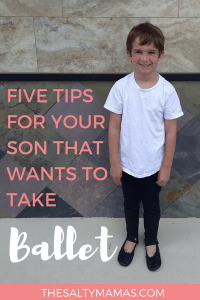 My son had a lot of ideas about what it meant to be a ballerina – and those ideas either didn’t leave room for boys in ballet, or made it a less than attractive option for him. His biggest concern was probably if he would have to wear pink. I told him he didn’t, but he quickly pointed out that girl ballet dancers wear pink. Having never seen a boy ballet dancer, he had nothing else to go on. I pulled up the website for our local studio and read him the dress code for boys and girls and he was very relieved to learn that he would wear black tights/leggings and a white shirt. Oh, and no pink shoes either!

Rather than cast our assumptions of why our kid doesn’t want to do something (and maybe giving them whole new reasons they haven’t even thought of to oppose something!), it’s much easier if you just ask them. It’s so important to listen to our kids concerns and questions. Those concerns are their fears and the answers to the questions may be what alleviate them. Plus, if you don’t know the answer (or even if you do!) it can be helpful to find the answers together, as this involves your child in the process.

Sunday mornings before church, I paint my daughter’s nails. Some mornings my son picks out a color and asks me to paint his nails too. Sometimes my husband even gets in on the action – I think to give my son a partner in crime. But I do explain to my son that some people think that only girls paint their nails and what that could mean for him. So now, when someone tells him “Boys can’t have their nails painted” or “That’s only for girls” he’s quick and happy to set them straight.

It wasn’t long before the same thing happened to Cole’s newfound belief that “boys CAN do ballet.” A few days into our discussions, Cole came home from preschool and announced, “Well Mom, you’re wrong. Boys can’t do ballet. Celeste said so.” Upon this development, we took the opportunity to talk to our son about how some people think that only girls can do ballet, and that they’re wrong. We reminded him that it wasn’t that long ago that even he thought boys couldn’t do ballet.

So it doesn’t help to hide from this very real possible response your son may receive, but rather talk it though and explain how to deal with it. If you think it may deter your kid from even trying, it may be something you want to prepare him for ahead of time. Then you can work on providing your child with the tools to engage in discussion with their peers.

Educate Yourselves and Others

Teach your child first and then teach your child how to teach other kids. Rather than just tell other kids they’re wrong and mean for thinking ballet is only for girls, teach your child to understand that they may not have any exposure. Use this as an opportunity to educate, not berate. If you provide your son (and other kids!) with the tools he needs to talk about this new hobby, he’ll be much happier and more confident in taking classes. You – and your son – can share really cool information, like that football players often take ballet lessons for coordination, increased flexibity and injury prevention! Don’t believe it? Check out this video!

We’d had some good conversations about boys and ballet, but my son needed to be exposed to it in our every day lives. We started with one of our favorite activities – watching YouTube videos while the girls nap. Usually we watch videos of animals or sometimes point of view videos of roller coasters. Instead of the usual, I asked him if he wanted to see some really cool videos of boys doing ballet. He was riveted as we watched videos of men leaping, spinning, a partnering with ballerinas. He saw male ballet dancers as strong and skilled, and was soon leaping around the house.

Since then, we’ve also watched one of my favorite movies Center Stage – and then watched it again. And again. And again. There is an AMAZING brand new book out called Harrison Dwight, Ballerina and Knight. This is an adorable rhyming picture book with an empowering message that challenges stereotypes and is perfect for all boys. We’ll also be taking the kids to the ballet soon. Just like any other passion we would have, we’ll feed it with exposure. Kids into baseball go to games, play catch at home, watch games on TV with Dad and have books and toys and movies that reflect their interests. Dance should be no different. 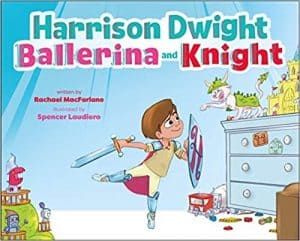 Some studios may have no boys in the classes. Try to see if there are any in your area. No dice? Talk to some other parents to see if their sons would be interested! If they’re on the fence, good selling points are that dance requires discipline – something my friends with little boys are usually open to! – and that it’s just once a week with no games all day on Saturday! Think your friends wouldn’t be up to it? Don’t be so sure! Just today I was scrolling through Facebook and in one of my Mom groups someone posted about their son being interested in ballet and the responses were fast and furious from other Moms of interested sons! So grab a friend and head to the studio together!

One of the coolest experiences we had in Cole’s first weeks of ballet classes was that other Mom’s came up to me and said how great it was to have another boy at the studio. They told me about their ballet dancing son, gave me tips (let the little ones wear black leggings – from the girl section, shh! – and they can transition to tights when they’re ready), and were eager to introduce their sons of all ages to Cole so that he could everything from little boys to teenage dancers.

Cole is now four classes in, and while he needs a little reassurance between classes, he leaves every week with a smile on his face and announces, “I loved it!” He hasn’t owned complete confidence yet in the idea of being a ballet dancer, but to watch him in class is all I need to know that we are doing the right thing encouraging this current passion of his. And I hope that these steps help you get your son ready for ballet if he’s interested! 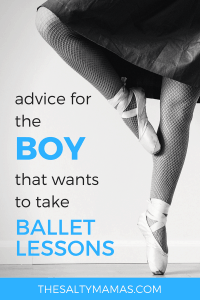