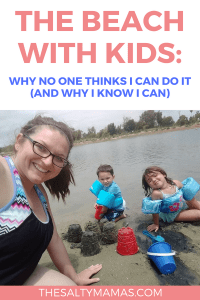 There’s this thing that happens where someone can’t picture doing what you’re about to do. Like when teachers take twenty kids on a field trip to the zoo, or when a mother announces she is going to have five preteen girls come to her daughter’s sleepover.

It doesn’t matter whether or not they are actually qualified to do it, SOMEONE out there is going to be unable to picture themselves doing the same thing. And instead of thinking, “wow, maybe she is uniquely qualified to manage this situation,” their brain tells them, “she can’t do that! It’s dangerous!”

Take, for example, the other day when I decided that I was going to take my kids to the beach. My kids are on the littler side, 4 and 1 1/2, so it was not going to be without its challenges.

I live in a beach city, so it’s not the ordeal you might imagine. We were going for an hour and a half. My friends were going. I had packed everything and we were in the car and ready to go.

And by the way the people around me responded, you would have thought that I announced I was going to take my kids to fight tigers. 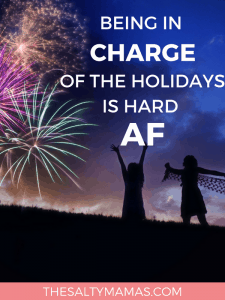 Ah, the Fourth of July. We celebrate our freedom. We eat hot dogs and hamburgers and watch fireworks displays. If we’re lucky, some of us go to the beach or the lake or a pool, and we visit with our friends and family and neighbors, and we soak up what it means to be an American.

Unless you’re a certain brand of mother, who lives in a certain kind of neighborhood, who has kids with certain expectations.

Okay, so let’s get more specific- if you’re me. 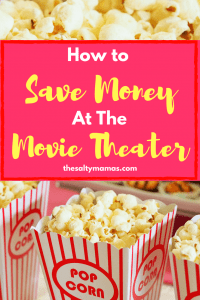 Those summer movies may SEEM like a deal- until your kid discovers the concession stand. How we save money- and still get treats!- at those “cheap” summer movies, from thesaltymamas.com.