There are two kinds of toddlers: the kind that are super picky eaters and the kind that aren’t. And there’s a ton of helpful information out there to help your picky eater. Which is awesome! But as much as having kids that won’t eat anything is a major PITA, I’m here to tell you that having kids that eat EVERYTHING isn’t that great either. So whether your kid is a human garbage disposal too, or you just want to feel better about your situation, here are five things that are major downsides to having kids that everyone considers to be “great” eaters. 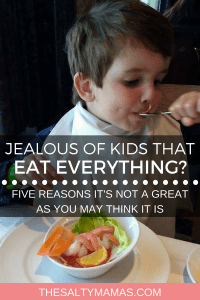 You Never Get Your Own Food

Yes, if your kids are picky eaters you may need to make some adjustments with where you can eat out. However, it seems that most restaurants have realized that kids are picky and have created the quintessential kids menu you can get almost anywhere: Some version of chicken nuggets, a grilled cheese sandwich, macaroni and cheese, maybe a quesadilla, possibly a hot dog, all served with French fries. Chances are your picky eater will like one of these staples.

My eater will pretend they want one of these things. I’ll go ahead and order whatever I want. Maybe some big, beautiful salad with tons of veggies. Or maybe I’ll get a pasta with a sauce that’s GREEN. Pizza with all kinds of “disgusting” toppings. FISH! And sure as my kids waking up at dawn, when the server brings our plates my kids will poke at their order for a minute before eating all the tomatoes out of my salad, devouring my pasta, eating the disgusting toppings and tossing me a scrap of fish.

While I had to eat chicken tenders.

One Friday night we were going out to dinner and we asked the kids, “Where do you want to go?” They consulted each other and then delightedly shrieked, “The Fish Place!!” “The Fish Place” is what they call a local fast casual restaurant that has super affordable items and a great kids menu including fried shrimp and white fish. The kids love it – and they don’t steal MY food – so I love it too. However, this time when we arrived a major meltdown occurred. “Not THIS fish place!!! The one with the LOBSTER!” Excuse me?? Yes, my five year old was throwing a fit because we weren’t going to the FANCY fish place, where he could order LOBSTER.

Now, before you lose your head, we’ve never actually gotten him a lobster before. But we did have a coupon once and got a lobster for my husband and my son tried some and now thinks he’s a fancy foodie that gets to eat things like lobster whenever he fancies. Because he has no concept of things like how freaking expensive his little taste buds are. But we do. So we have to be fairly judicious in where we go, because if given the choice, my kid’s going to order the most expensive thing on the menu. 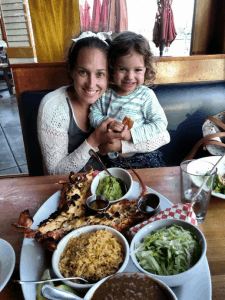 Have you ever seen a three year old take a bite of soup and say, “I prefer the clam chowder at the other place.” Or a five year old complain that the calamari doesn’t have enough of the “squiggly crunchy parts” (aka the tentacles!!)? Or worse yet, eat at someone else’s house and scoff at their steamed veggies because they prefer theres with a burre blanc? Because I have. From the mouths of my own little foodies. And let me tell you, the looks that I have received from other people make me want to crawl under a rock and die of a tiny bit of shame. Because on the one hand I swell with a tiny bit of pride that my kids know and love their food so much, but also, they seem like such picky little punks! Shut your mouth and just eat your salad without complaining that it doesn’t have enough veggies and has too much ranch dressing.

I wish for the love of God my kids would just eat a sandwich like a normal person. (And to be fair, one of them will. But still). So when I go to pack them a lunch I stare mindlessly at the kid friendly lunch options and wonder why oh why I didn’t send my kids to a preschool that will heat up their lunch. Because the one year old is a culinary diva and doesn’t like a cold lunch. She’d prefer warmed noodles, some freshly cooked meat, rice and beans with chips and salsa. Which I completely spoiled her with until I sent her off to a really well regarded play based preschool. So every day I send her off with crackers, hummus, tons of fruit, sliced olives, and sometimes a sandwich along with my hopes and dreams. And darned if that sandwich goes untouched and I have to feed her  lunch when we get home anyway.

It’s Easy to Stop Paying Attention to What They Eat

In my mind, my kids are “great eaters.” They love all kinds of veggies and fruits and proteins and so I rarely have to worry that they’re not getting all the things they need to eat. Until I stop paying attention. So if my husband has been having late nights at work and I’ve gotten lazy and made lots of easy traditional “kids” meals or we’ve eaten out a lot I just assume they’re still eating well. As though carrots are magically appearing on their plates! Or perhaps they’re going to the refrigerator and making their own healthy snacks when I’m not looking? Either way, if your kids love peas it’s easy to forget that you actually need to make sure to make them available. So I still need to keep track of what’s actually going in their bellies, not just what I know they will eat.

Thankfully, we made an INCREDIBLY handy Toddler Nutrition Plan to help me (and you!) make sure your kids are getting the variety and quantity of foods that they need! Sign up for our newsletter to receive it – and all our amazing printables! 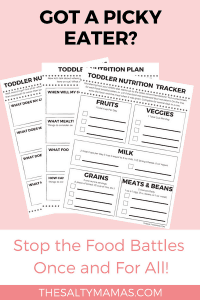 Loved It? Share It!
Previous Post: « Picky Toddler? Find Out How to Make Dinner Easier with Toddlers
Next Post: One Year Blood Draw Show Anemia? Here’s How You Can Help »