When the babies were little, we used to take them on these “playdates” with our MomSquad. We’d pick a destination like the nature center or storytime, but what we really wanted was the companionship. And the desire to feel like we were doing something with the babies, because honestly, what are you even supposed to do with a kid that can’t even talk or move on their own yet? 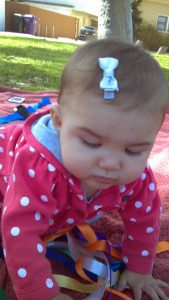 So we’d lay them on the blankets and chit chat about our lives. We only had one veteran mama in our midst at the time, and she casually mentioned that the hardest part about parenting two was that you had to ignore one of your children from time to time.

What she meant, of course, is that one child’s small needs have to take a backseat to the other child’s BIG needs once in a while. Another mama literally put her hand to her mouth in horror. “I don’t care how many kids I have, I would never IGNORE one of my children.”

Spoiler alert: you would. You absolutely would.

Because when you’ve got two or more kids, the concept of “emergency” can take on a whole new meaning.  And when faced with aa parenting emergency, you HAVE to favor the squeaky wheel. Because the squeaky wheel may be bleeding. Or trying to poop in a potted plant.

Oh, come on, like that hasn’t happened to you.

At any rate, when you’ve got more than one kid, there’s a whole new hierarchy of what needs to be prioritized. We’ve got the Levels of Parenting Emergencies below, ranked from most severe to “meh.” 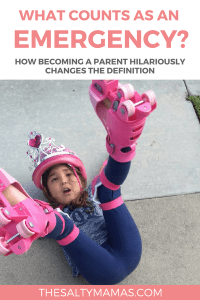 I get it, you have a sweet baby napping on your chest. You are relishing the cuddles and snuggles and smelling that sweet baby smell. It’s all soft and special, and you can’t imagine ANYTHING breaking this bond. 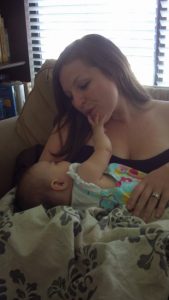 But blood will. Blood definitely will. Nothing sends a mama running like a cut to the head. (Seriously, has your kid ever cut their head? Those things bleed like nobody’s business.)

Be it a potty training toddler, or a preschooler who still needs a little help cleaning up, or even YOU mama- sometimes, the proverbial shit happens.  You’re going to need to act fast to make sure all that excrement ends up where it’s supposed to be. It’s a dirty job (like, literally. Ew upon ew.) but somebody’s gotta do it. Again, spoiler alert- it’s you. 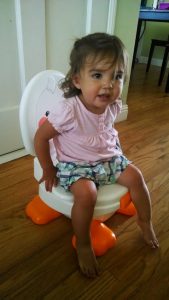 Okay, so there’s no blood, but a bump or bruise has suddenly made an appearance. The infant who is slightly uncomfortable in a soggy diaper is going to have to cede their place in line to the sobbing mess that was formerly a happy big brother.  You’re weighing the discomfort here, and the balance definitely tips in favor of the one who might need to go to urgent care. 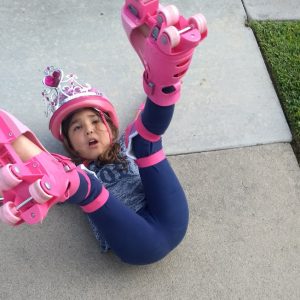 Someone is Holding Scissors

This happened to me once, and I did not run immediately in the direction of that person. Please- learn from my mistakes. Scissors take priority. 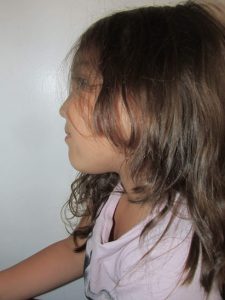 The placement of pee on this list is a tricky one. Are we talking about the aforementioned soggy diaper? Or is it someone who is wearing undies for the first time today? Is mama at risk of needing to buy new pants at Walmart (again, LIKE THAT HASN’T HAPPENED TO YOU).

This one is not as cut and dry as the others on the list (pun intended, naturally), so you’re going to have to use your judgement about the priorities here.

Someone is Making a Mess

And we’re not talking about a few toys. We’re talking digging into a mountain of melting chocolate, or scattering popcorn kernals throughout the house.

I know there are other things that may seem more important, but not RUNNING in the direction of the spilled sensory bin could lead to hours worth of mess- and thus, clean up. You’re going to want to address this ASAP. 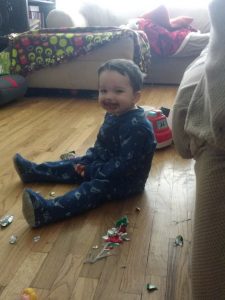 Like, what kind of fighting though? Is it the kind where they learn each other’s boundaries and gain experience with the art of negotiation? Or the kind where someone is about to get pushed off a parked boat onto concrete (ahem, KAYCI)?

My gut instinct is to move this lower on the list, but then again, there’s big potential for disaster here. So you may not need to drop the baby (safely-ish) and run, but you might want to move yourself in the general direction of that squabble.

Oh that squeaky, squeaky wheel. Only you can know whether those are crocodile tears or the real deal. And let’s face it, sometimes we have no idea.  But it’s a clear and definite signal that someone FEELS neglected/offended/disrespected/hungry/thirty/tired/wet/dirty/left out/unimportant/hurt.

Even trying to figure out which one it is will likely take some precious time, with someone inevitably being ignored in the process. But the upside is that this is one area that the baby typically has locked down. So take that, potty-training-brother-who-gets-all-the-attention. 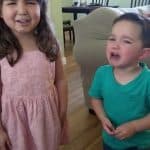 Someone is SUPPOSED TO BE ASLEEP, GOSH DARN IT

Your day is so reliant upon naps, it’s borderline ridiculous. When you just have one precious baby, of course you can cater your life to their schedule (if you choose to, anyways).  But when you are trying to cater to two precious snowflake schedules? It just can’t always happen.

So maybe the baby has to fuss a bit while you rock to the bigger one to sleep, because if Sissy ain’t happy, ain’t NOBODY happy. It might seem like you’re sacrificing the younger one, but in the big picture view, a non-violent, non-cranky, non-feral sibling is the best gift you could possibly give them. 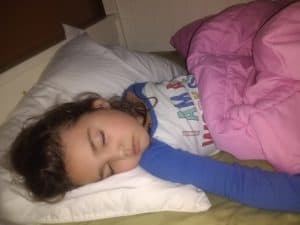 And if the person that is supposed to be asleep is you? God help the one that tries to interrupt the precious little sleep you’re entitled to. Never has one been so tempted to “ignore” that darling child as they are at 3 am, I can assure you of that.

Loved It? Share It!
Previous Post: « How to Set Up a Lemonade Stand (With FREE Lemonade Stand Checklist!)
Next Post: 4 Fun Things You MUST do While Pregnant (and One Responsible Thing) »