Once upon a time, when it was just the two of us, my husband and I were younger people with lots of energy. We could stay up late, watch TV, talk to each other, enjoy a cocktail and, well….you know what happens next in the RomCom that was our “Once upon a time.”

Then we got married. Had kids. Became chronically exhausted. And some elements of those younger people’s lives slowly fell off the radar. We stopped watching multi-season television series and settled for single season commitments like Survivor or American Horror Story. We were maybe the only people NOT pissed off about Game of Thrones being only seven episodes this season because it was manageable enough that we could finish it.

Half the time one of us is asleep by the time the other gets back from putting the kids back in bed after their philosophical inquisition/demands for water/”one last hug.” Conversations are often about said kids, our upcoming schedule, or what needs to get done around the house. I’m too tired to even drink wine, so I’m not going to spell out for you what else I’m too tired for.

But sometimes, we get a babysitter. We go to dinner and don’t talk about the kids or what a mess the house is. We see a movie. And, being the cheapskate that I am, maybe I smuggle in a can of beer for Chad and a can of wine for me. (Yes, I drink wine from a can, and it’s delicious). While he’s brushing his teeth, maybe I put on my pajamas with a lacy sports bra I admittedly got from Costco – because sadly, that’s the level of romance I bring these days. But for me right now? That’s trying.

As I brush my teeth I think, this was a really good night. I come out of the bathroom…..and find him passed out, face down, on the bed.

Which is okay. We’re still chronically tired, and according to my calculations our three year old should be arriving in about an hour, so we should probably try to get as much sleep as we can before our Queen bed gets a little more crowded.

The next morning we went through our usual Sunday routine. Breakfast. Coffee. A little playtime. And then…..Mr. Frisky shows up and gives me a flirty little grab. While I’m trying to pry a booger out of my fifteen month old’s nose. I spin around wondering what the hell is going on. I toss the kids in the tub for a bath before church and as I go to the closet just outside the door he shows up out of nowhere and lifts me up provocatively with a wicked look in his eye as he says, “Just seeing if I can.” I point out my wet shirt (not the hot kind, the “my kids are doing that whale breaching thing” kind), try to explain that I’m at a level 7 frustration with the kids not listening and that maybe now isn’t the time.

I immediately text Jaymi to ask her what the hell my husband’s problem is. To ask WHY he has absolutely no sense of timing. To exclaim that THIS is why the romance is dead. She appropriately responds immediately with a thousand crying laughing emoji, because the truth is, I’m laughing too.

If we can stay awake. 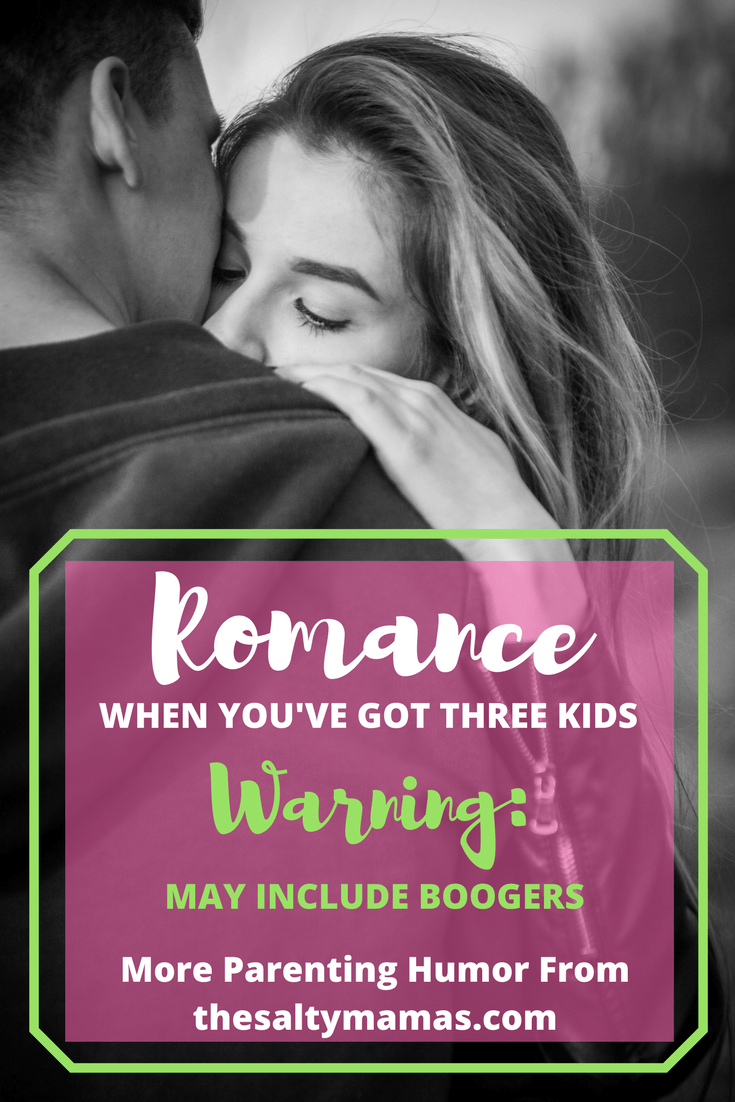 The Romance is ALIVE and well. As long as you’re willing to put up with a little boogers.