Welcome to the second installment of The Salty Mamas Book Club! If there’s one thing that you take away from our latest book, it should probably be the Renegade Golden Rule:

It’s Okay if it’s not hurting people or property.

Initially, this had me a little like, “Whoa. Then what ARE the rules??” But the more I read the more I realized it wasn’t about chaos and a complete lack of structure. There’s still discipline. There’s still order. I’m still the parent. And that’s when I decided I could really get behind this….So here are some highlights of what we loved – and what we didn’t.

As a teacher of young children, you can imagine the amount of tattling I dealt with.  “She hit me!” “He’s cutting!” “They said I can’t play!” And time and time again, my response was the same- “What did you tell them?” Because I’m not going to help you fight a battle you haven’t even tried to solve yourself.

So you can also probably imagine my delight when I found that “It’s OK Not to Share” has a chapter on the importance of conflict in kids’ daily lives. They are going to have problems with other kids and, sometimes, even with adults. Sure, we could rush in and solve the problems for them, which frankly just seems soooo much easier sometimes. But what if we gave them the tools to resolve conflicts on their own? The author recommends that we teach kids to speak up for themselves, to use strong voices to set boundaries, and that they are in charge of themselves.  And if they can’t do it on their own? That’s where the adult steps in as a negotiator, helping the kids to solve the problems for themselves.

“I Hate You!” Is Nothing Personal/Go Ahead and Let Him Hate the Baby

I remember the first time Lila told me she hated me. I had just made her leave a toy she very much wanted behind at a friend’s house, because she threw a HORRIFIC tantrum about it.  She was absolutely, ridiculously furious, and those big words just spilled right out of her tiny little body.  She looked vaguely terrified of herself, like she didn’t know what she would do next.  I pulled the car over, pulled her out of her carseat, and gave her a giant hug. She collapsed into me and sobbed and we worked it out. So yes, I agree that there was nothing personal about her “I Hate You.”

However, I disagree with the author on one big point here- I don’t think that she should be allowed to tell me she hates me. I think the author kind of agrees with me on this one too, because a few chapters later, in “Go Ahead and Let Him Hate the Baby,” she states that the child should never say she doesn’t like the baby within earshot because it will hurt their feelings. What about MY feelings? I deserve to have my feelings protected to, and so no, I will not allow my kids to say they hate me. Even if it ISN’T personal.

It’s the name of the book, so we better touch on the attention grabbing rule that has people going, “But…But…But!” Probably like most of you, when my child has something another child wants, the words, “Okay, finish up and give your friend a turn” just come tumbling out of my mouth. I definitely do it with my own kids.  Heck, I literally wrote a whole blog post about how I mastered the art of taking turns! The words are mostly habit at this point, and to be honest, a little bit courtesy to appease the other parent as much as the child. “See? My kid isn’t a toy hog!” But what if my child was in the middle of some really creative play? What happens to my child when I end that before he’s ready? I’m pretty hardcore on team play. I love watching my son and daughter use their imagination in incredibly inventive ways – ways that I certainly don’t want to stunt.

I really enjoy the way this book has you “Take Off Your Adult Lenses” to see things as the children see them. This chapter talks about how “interrupting play – and instantly rewarding the other child – doesn’t benefit either child.” And that “young children aren’t ready to share, they’re ready to take turns.” So it’s not about encouraging your child to be selfish, but rather to communicate when they’re done with a toy and to then be courteous. We’ve implemented it around here, and I’m digging it BIGtime.

Ahhhhhh, why didn’t I read this book years ago? I can only imagine all the anguish and stress I could have saved myself, agonizing over why Lila was excluding kids and refusing to play with the male friends she had played with just last week.  It’s not that I would  have allowed her to be unkind, but I wouldn’t have spent months crying and reading “Little Girls Can Be Mean” and considering taking her to a psychologist to work on her mean girl behavior.  Because she was three.  There are lots of strategies in the book- again, like dealing with conflict and helping the kids find a way to work things out on their own- to help kids learn to play better together, but at the end of the day, there’s going to be squabbles, and that doesn’t mean my kid will be turning into Regina George anytime soon. Thank God.

This one was definitely the one that had me pushing back the most prior to reading. We have one water gun hiding somewhere in the garage, but other than that, we are a gun free house. We were those parents that made a conscious and very purposeful choice to “not keep guns in the home.” I was very skeptical that this book could do anything to sway me. So, of course, I changed my mind and told Cole he could play with guns.

Cole is obsessed with all things superhero. He loves to wear a cape. He rescues his sisters. And yes he was turning really ordinary things into guns. The strangest was the stand from the cleaning set. The mop, broom, and dustpan were thrown aside and a gun was born. I was trying to fight it. And maybe it’s just that the book let me stop fighting it. Because it helped me understand that Cole has very few opportunities in his life to be a hero. He gets things wrong, a lot. He’s always being corrected and having to learn things and all the scolding. But when he puts on his costume and grabs his “shooter” he’s a strong, powerful, good guy. And it’s fantasy. He gets that it’s not real and he’s four. I’m thirty four and should be able to figure that out as well. The book points out that children playing parents use dolls, pirates use swords (which we don’t seem to have a problem with), chefs have pots and pans and fake food, so good guys and bad guys need props too.

Furtermore, there are lots of great tips for how to ease into gun-play if you have a knee jerk reaction (like I did!). Plus, and I found this super important, the author makes it clear that kids should ABSOLUTELY understand the difference between play guns and real guns and has some great pointers for discussing that as well!

Did we pique your interest? Watch us discuss the book LIVE on FB, Monday, Sept 18 at 8:30pm PST!

Need to devour this book yourself? Snag a copy here and let us know what you think! 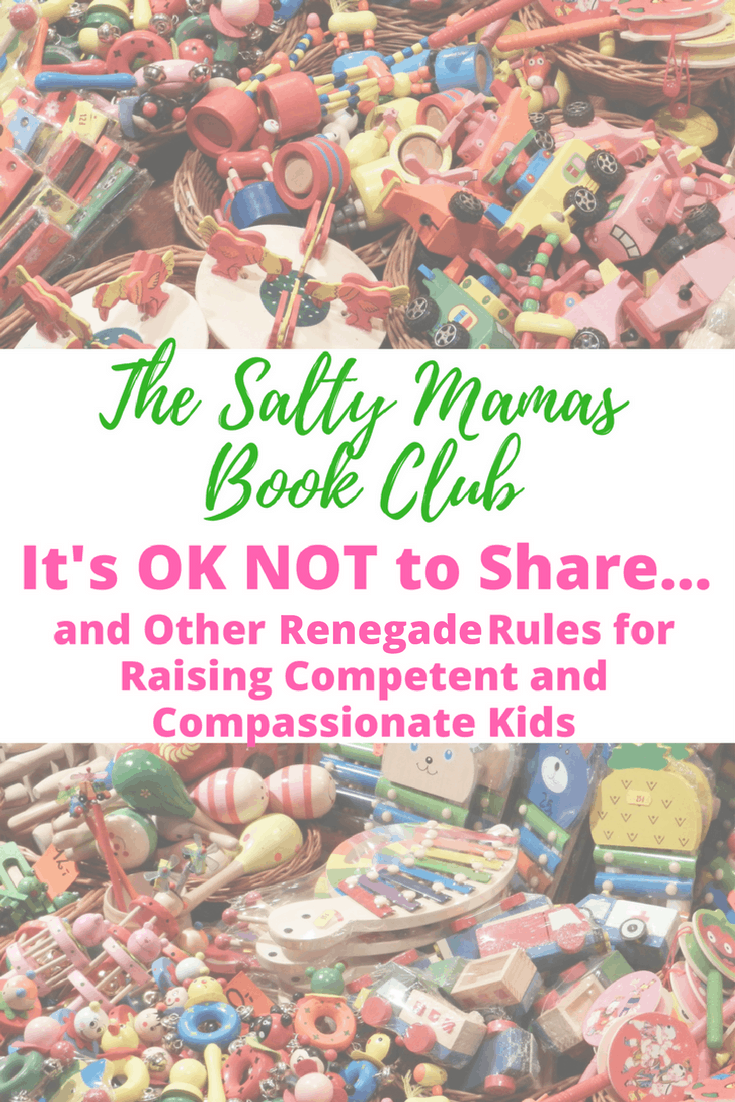 18 thoughts on “It’s Okay Not to Share Book Review”