This morning I opened my email to find a very rare message from my husband. We’re not people that email, text or really communicate while he’s at work, so I knew this was either something urgent, important, or special. What I received was a picture, followed by this: 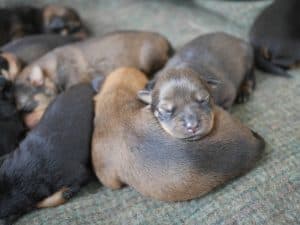 I know we are not ready and really this burden would fall 100% on you but this could be the adoring fan who is always there for him that he needs.

I quickly went through a thousand emotions from rage, to thinking he was sweet, to crying at the idea of another thing to keep alive, to swooning over how adorable the pups are, to realizing that I needed to nip this in the bud. Fast.

I clicked “Reply” and fired off my ten reasons we are NOT getting a puppy right now. 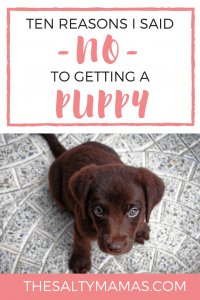 1. What the hell would we do with a puppy on our upcoming vacation?

On the books we have a four day cruise, a night at Great Wolf Lodge and are working on planning a three week road trip. I wouldn’t want to leave a young puppy in some sort of boarding facility – which is an added expense we haven’t budgeted for anyway – and don’t have anyone that could take care of a puppy.

2. We already have three small children.

Maybe he forgot we have a four year old, a three year old AND a one year old at home? And that I am trying very hard to keep these kids alive, and specifically from killing each other every day. What makes him think that we should add a cute little ball of insanity, fur, and pointy baby puppy teeth to the mix???

If three kids and a puppy is bad, three kids, a puppy and a baby is a nightmare. No, there’s no baby on the horizon yet, so the “puppy” would be at least a year or so by the time we added another kid, but still. Three kids, a DOG and a newborn doesn’t sound much better.

I remember when I was in grad school and one of my best friends and office mates called me from her gig at a pet store saying there was a puppy I NEEDED. I drove down and sure enough, I needed this dog. So I got him and took him home. Where I still lived with my parents. Who weren’t totally thrilled that I was doing this….again. Luckily, I was the age where I could promise to take care of the dog, and keep the promise.

Which is how I ended up sleeping with a crying puppy next to me. Now that I don’t have a crying animal next to me all night, I’d like to keep it that way for a hot minute. So no puppies today.

This may seem like a strange reason, but hear me out. During Cole’s first Christmas, my husband got it in his head that “a boy needs a dog.” To which I replied, “Sure, so when Cole’s a boy, let’s get a dog. Right now he’s a six month old baby, let’s pump the breaks.” Planner that my husband is, he mapped out our future children and we made a deal: we could get Cole a puppy for either his 10th birthday OR Christmas that year. Not one minute sooner.

So by my calculations, Chad’s off by about 5 years.

While the puppies were cute, I know a Hail Mary when I see one. Chad’s been hard on Cole lately – partially because Cole seems much older than his not quite 5 years, and partially because they’re so similar (read: stubborn). I think there was a part of Chad that pictured a triumphant return home with a secret box holding a boy’s best friend. So I had to do a little ego stroking and explain to him that Cole is supremely happy when they play Legos together or draw together or go on their special trips to Home Depot to pick up plants.

The moral of this story to Chad: More Legos, fewer puppies.

7. We’re Getting a Golden Retriever.

We have spent literally years debating different kinds of dogs. We’ve made lists and researched traits. We’ve thought about what dogs generally play well with kids, which dogs are easiest to train, the pitch of their bark, how much they’ll shed. And after all that, we threw away the list and decided that we both just wanted a golden retriever because we like them. That’s what I had when I was a kid and in my mind I can picture my son laying on his dog and I already smile at the picture. Because I know it’s still a few years away.

8. We Don’t Have Dog Training in the Budget.

And I’m not talking about dog training in the middle of the local Petco. I’m talking about sleepaway camp for dogs. We have one near us and my parents sent their very active yellow lab there and he came back a well trained dog that listened to my toddlers commands, snuggled with my baby, and didn’t jump on everything. And in case you think this was some hardcore training? The place was like a country club and the dogs hung out by a pool for playtime. So once I found out about this place I said, we are not getting a dog until we can send our dog there. 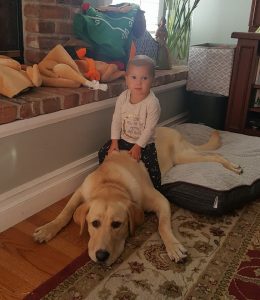 For now? That money is earmarked for a yard and a fence.

We have a dirt patch wasteland for a front yard. It’s somewhere between “we’re being California waterwise” and “we can’t decide on real vs synthetic grass.” But for now it’s a hot mess. And our next step in life is fixing it. All I want is to sit on my porch, with a lemonade in hand and watch my kids and their dogs play in our beautiful fenced in yard. We’re just missing the yard and the fence and the dog. And those things will arrive in that order.

Then I remembered that I’m the Mommy. I’m the wife. I’m the one that has final say on things like how many living creatures are under my care on a daily basis. And I don’t even have to give a reason. A solid NO is the only answer that question ever needed.

Now the cat my husband just promised my daughter she’d get for pooping on the potty? Well….that may end up being a different story for a different day….