I usually have no idea what’s trendy or what “the kids” are talking about, but every once in awhile I’m totally on point with trends. I even feel like I’ve helped start one or two . When I got married, I wanted red velvet cake because it had been my favorite and my wedding colors involved red. But the bakery we used didn’t even carry red velvet at the time. Six months later, and BOOM- red velvet is all the rage, every bakery around carries it and every bride has it.

Then four years ago, my friends and I started a co-op play school for our young toddlers. It quickly became known that if it was my turn to teach, there would be a sensory activity. Usually it involved some sort of flubber-yes flubber- back before I knew the word “slime” was cool. I never intended to become the Mom with the easy fluffy slime recipe, but somehow I found myself passing around my recipe all the time.

When Jaymi asked me if I’d share my no-fail fluffy slime recipe with The Salty Mamas, I happily obliged. This recipe produces amazing, fluffy slime that your little one will want to play with for hours- and you might even have some fun too! I get my daughter in on the mixing, and she loves picking the colors and scents. 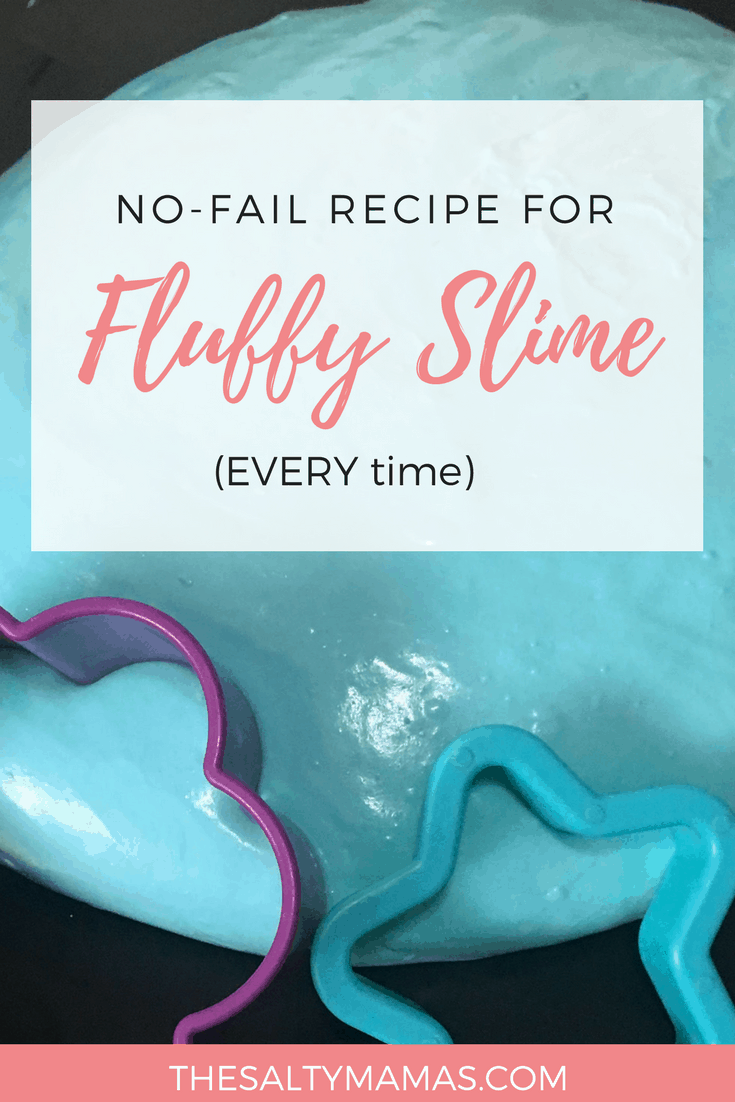 This post contains affiliate links. You can read more at our Legal Page. Thanks for supporting the Salty Mamas!

Note: this recipe does involve borax. Borax is a naturally occurring compound that can be toxic in super large quantities, just like salt can be. When used properly it can be safe. Just follow the directions, don’t breathe it in heavily, and don’t let your kiddo eat it.

Optional (but makes for extra fun):
5 drops of your favorite fragrance oil
Food Coloring or acrylic paint color of your choice

Step One- Add Your Base Ingredients

Mix 1 cup of hot water with 1T of borax and stir until it runs clear. Place aside for later.
In a large bowl add 1/2 cup of water with the Elmer’s glue, lotion, food coloring or paint, and baking soda. 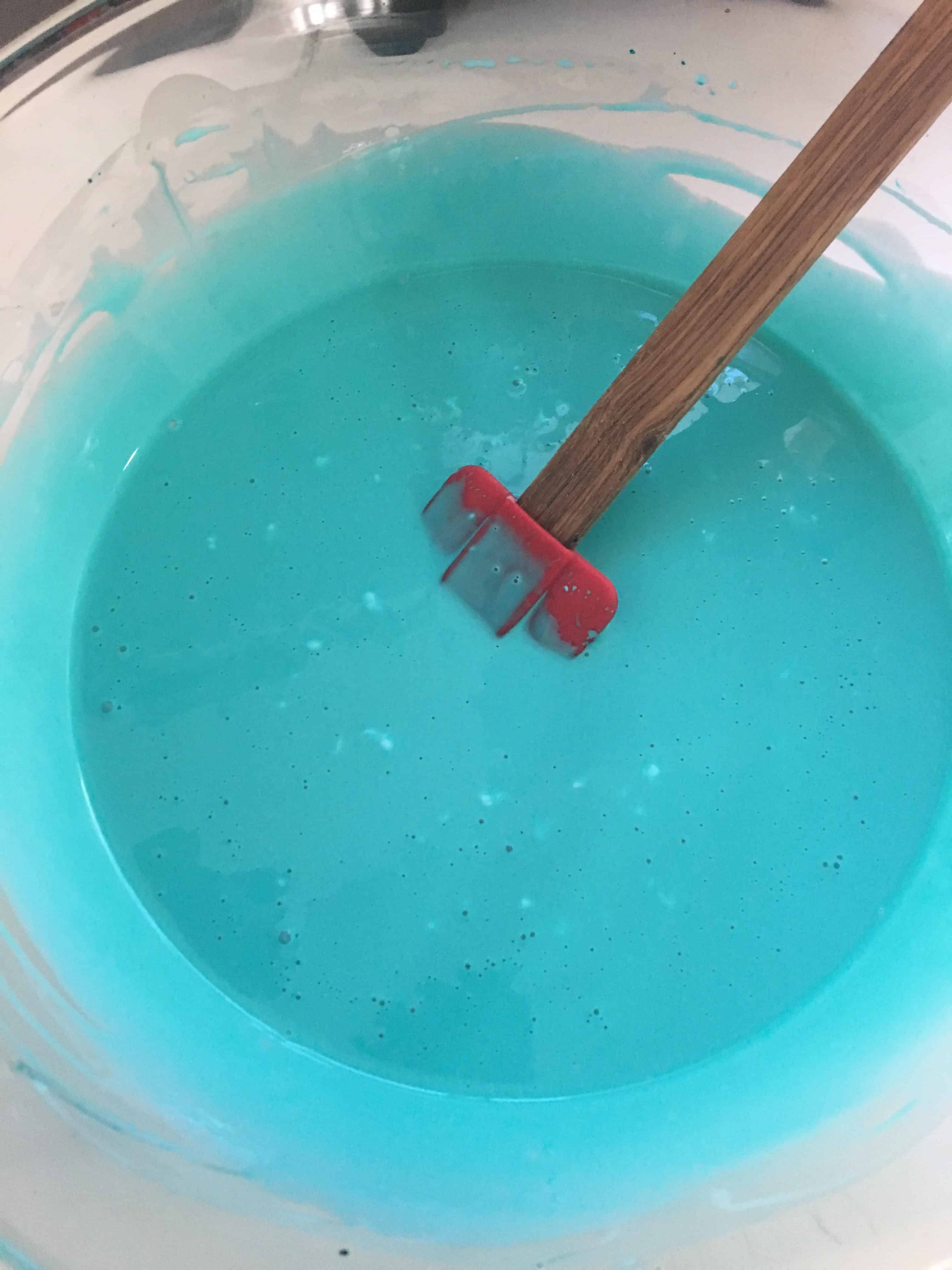 Slowly stir in the shaving cream until it forms a marshmallow-like texture. 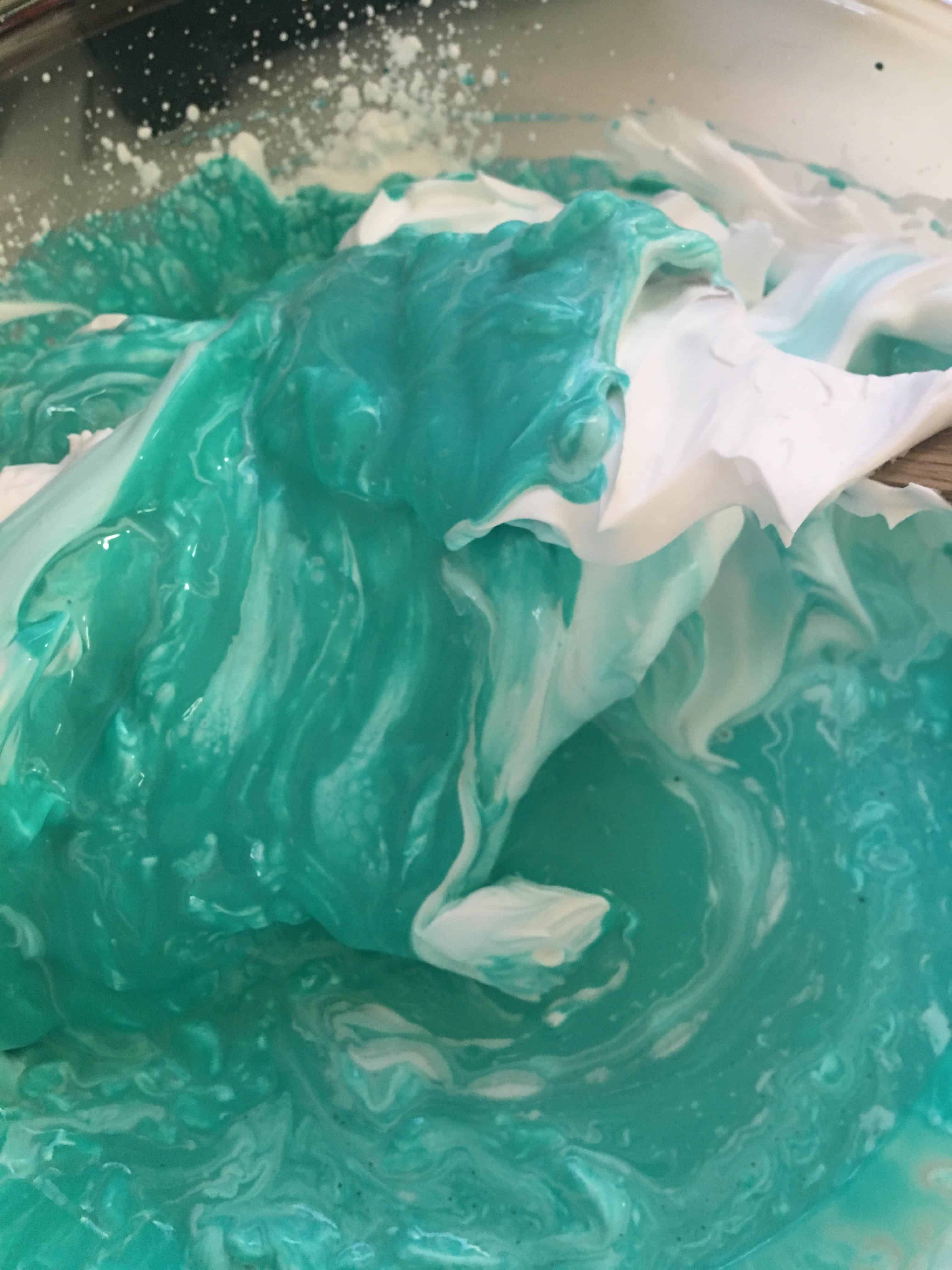 Step Three- Mix it Up

Add in 2 1/2 tablespoons of the borax/water mixture one tablespoon at a time. The mixture will slowly bond together. You might be tempted to add in more borax, but don’t! At this point you can add in more coloring until it reaches the desired shade, and fragrance oil (if your lotion was unscented) 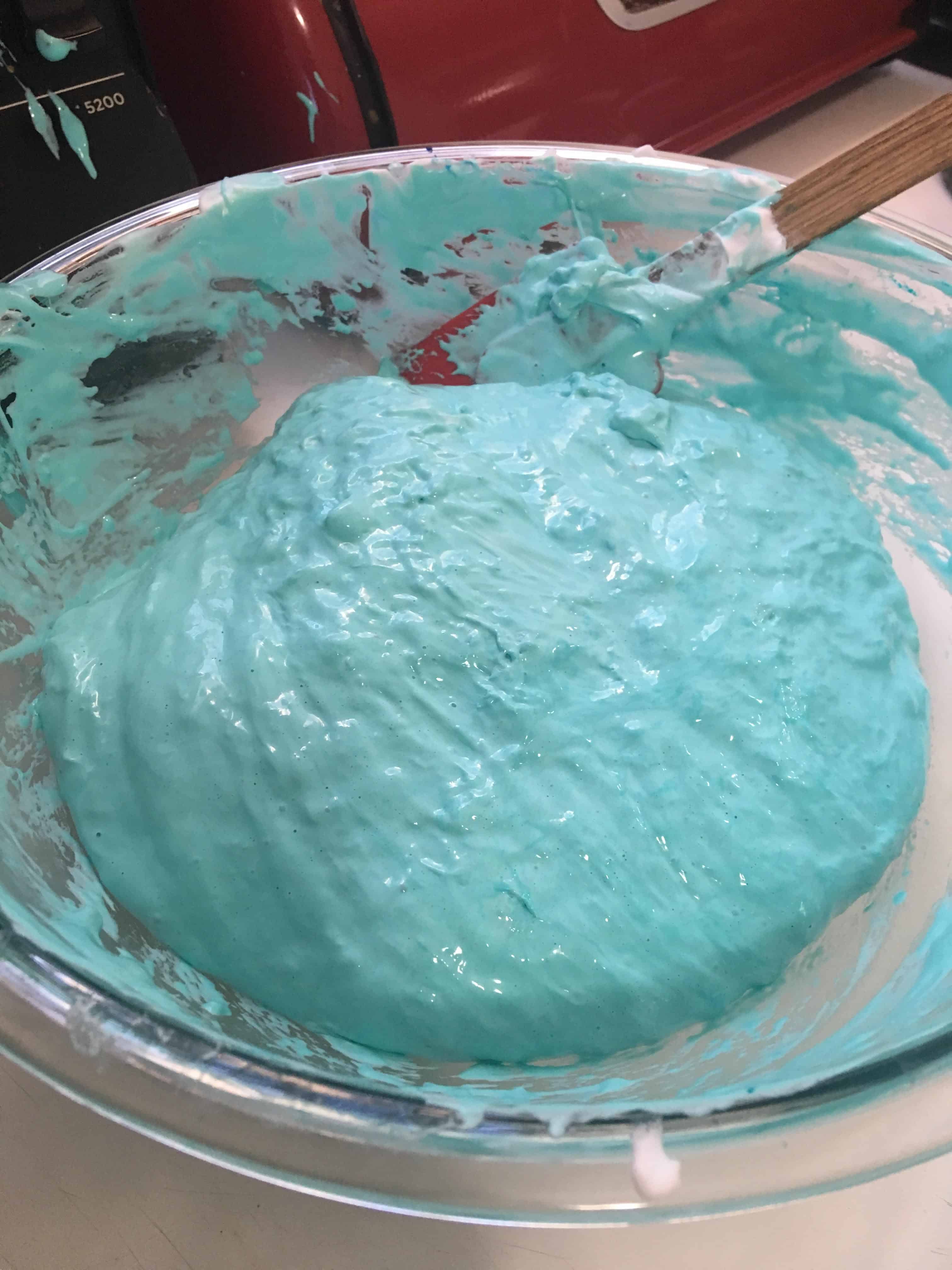 At this point you will want to take it out of the bowl. Stretch and knead it for about about five minutes. I usually let my kids do this part for some extra fun. 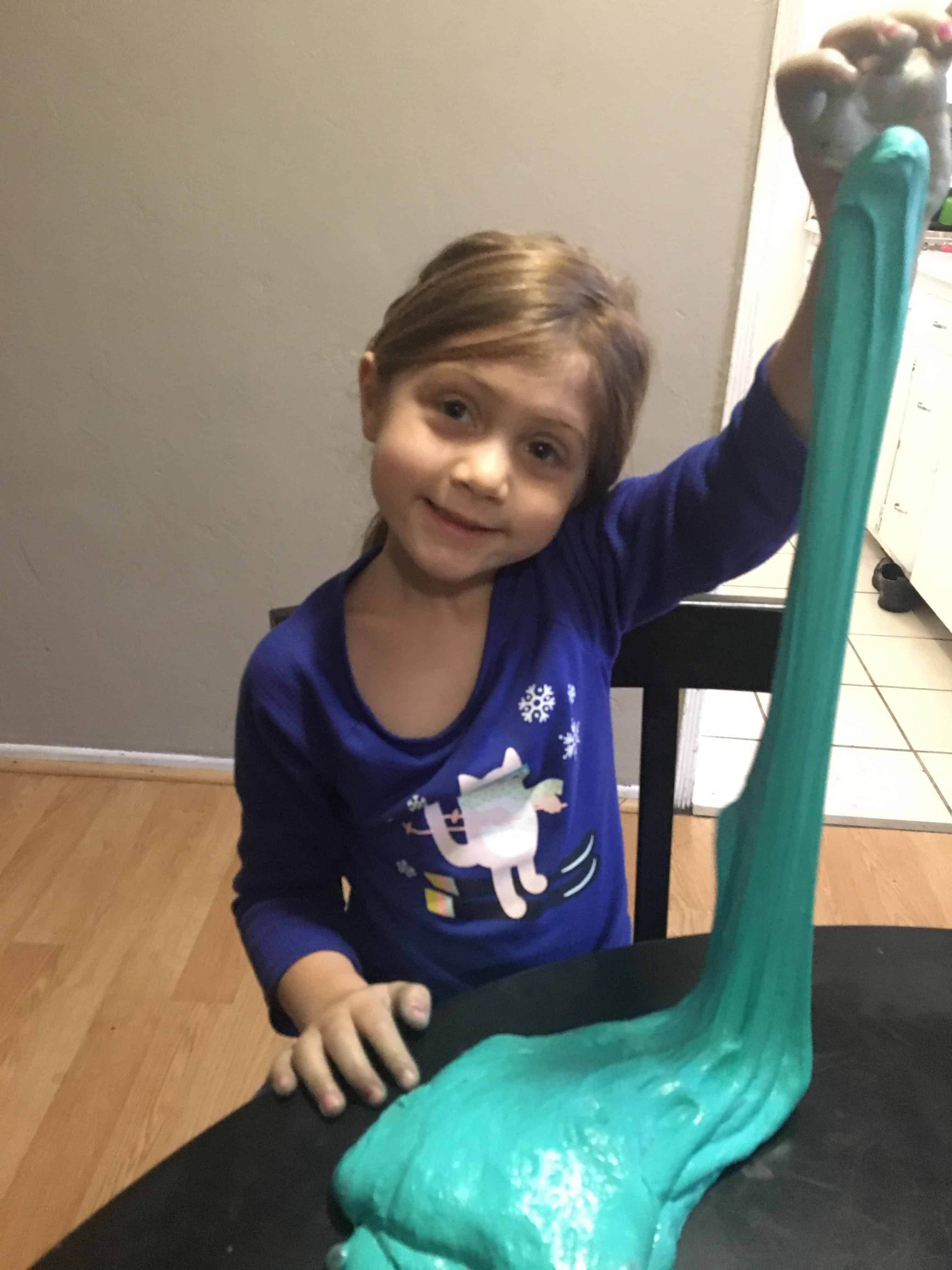 Now it’s time for all the fluffy slime fun! My kids enjoy playing with cookie cutters and other play-doh appropriate toys, but it’s fun just on its own as well. Keep it away from the carpet and fabrics, and you’ll all enjoy this activity a LOT more. Happy sliming! 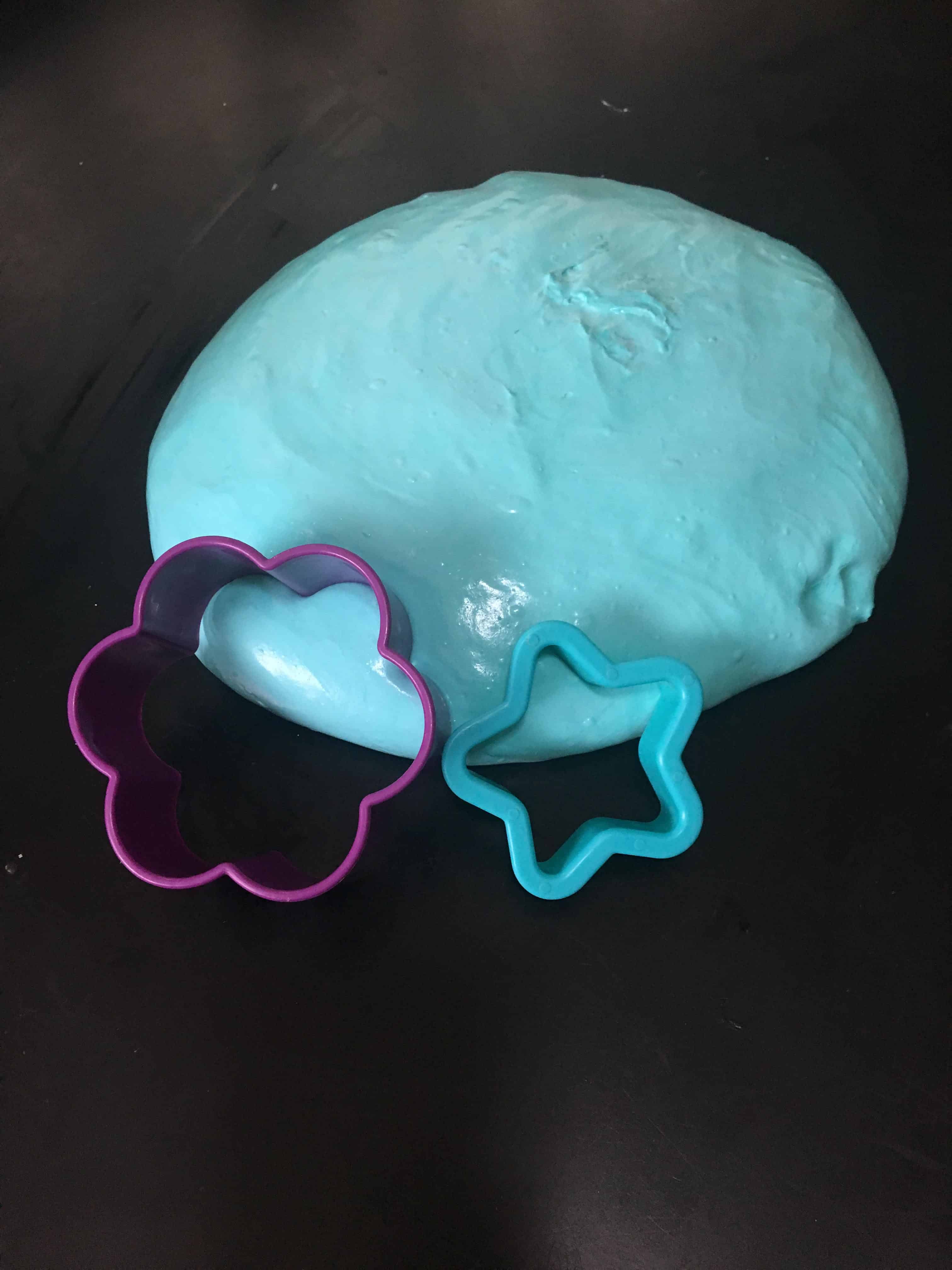 Looking for more ways to play with your kids? Head this way next-

Our new contributor Daniella Esquivias is a wife, mother, and Registered Nurse. She is known for her creative kids’ activities, delicious recipes, and generous spirit (which thankfully extends to sharing blog posts with us). Daniella is a founding member of our #MomSquad, and we couldn’t love her more.