Not a fan of pretend play? Or maybe board games aren’t your thing? You’re not alone. Here are six games I hate playing with my kid (and yes, I’m still a good mom).

Make no mistake: We love our kids. We do. No matter what you read in the rest of this post, hold tight to that solid truth.

But there is another truth, that is just as true: there are games I hate playing with my kids.

In no particular order, here are the worst kids games (pretend play, board games, and more) that we wouldn’t mind never ever ever not once having to play ever again. 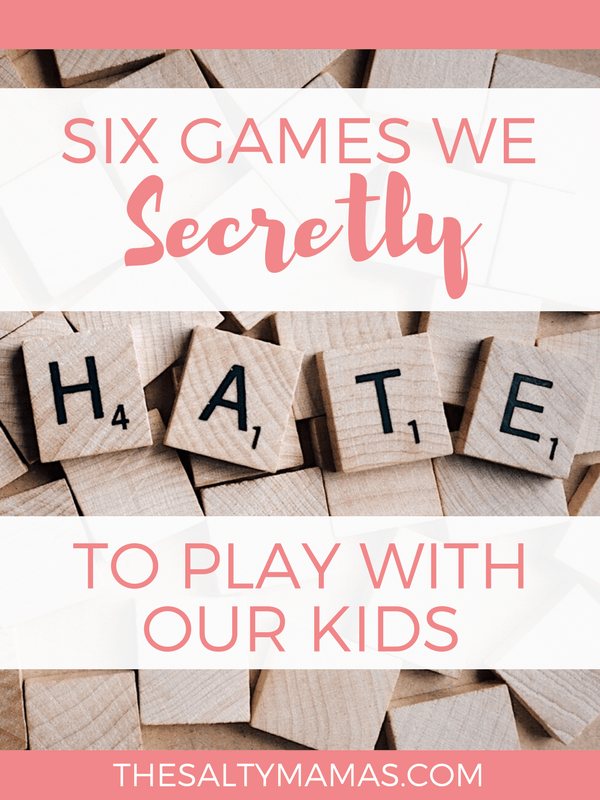 This post contains affiliate links. You can read more at our legal page. Thank you!

I Hate Playing Restaurant with My Kids

When my son comes up to me with his eyes lit up, presenting me with his “world famous soup” including “celery, donuts, and a bunch of other ingredientses” it’s so charming that I get sucked into his game.

47 minutes later I’m losing my mind and am ready to swear off food altogether if it means I never have to eat another pretend sandwich ever again. And God forbid my “Mmmmm!” drops below the acceptable levels of enthusiasm for pretend tasting over. and over. and over again. 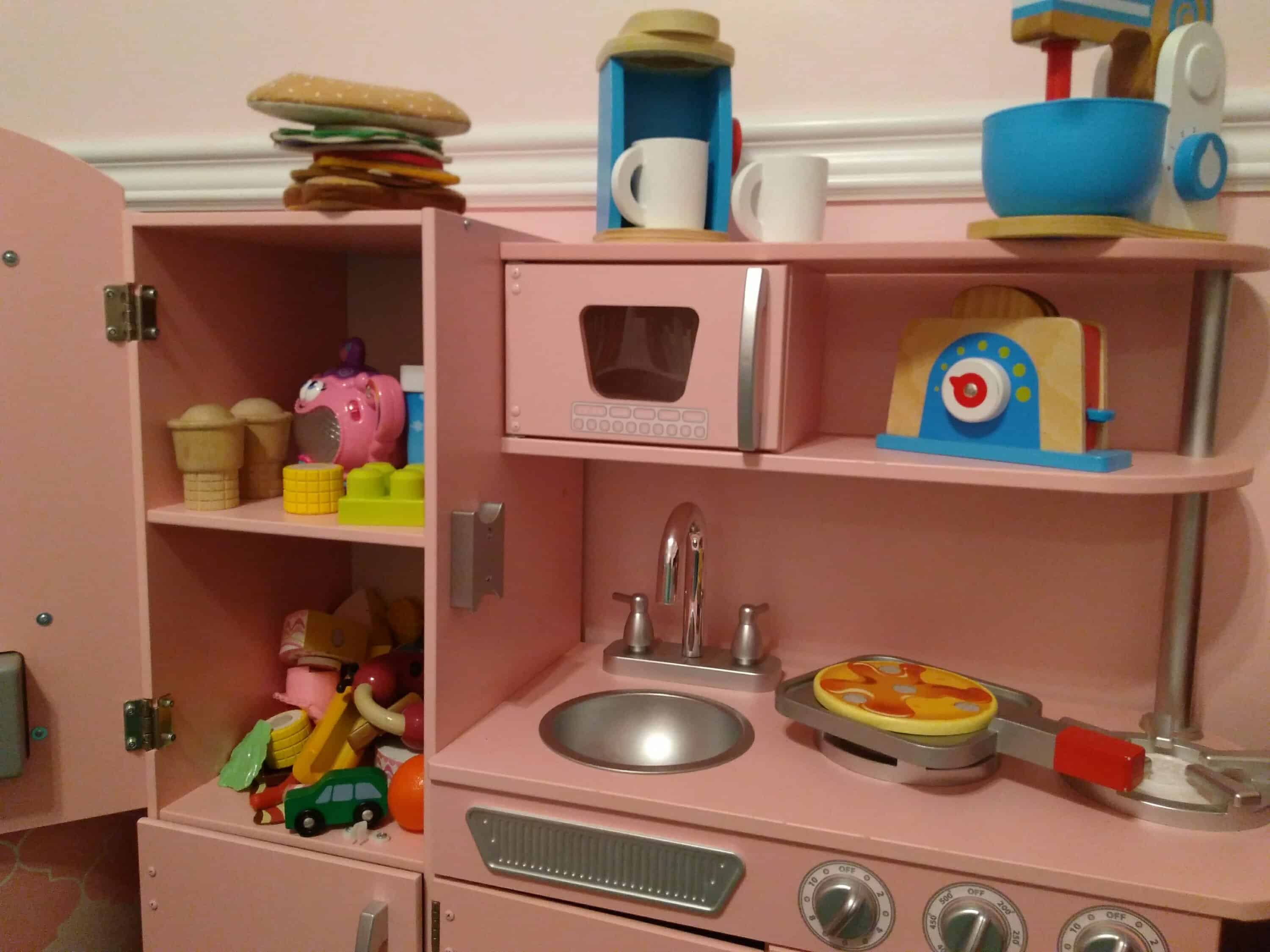 Side note: I’m pretty sure the conditions in that kitchen are not up to code. (Even though this kitchen is ADORABLE and my kids love it)

I Hate Playing Candyland with My Kids.

I know, I know, this game is a classic. But somehow my kids have managed to destroy part of my childhood with the drama than can unfold in one game.

First my kids will fight over what color kid they’re going to be. What once was simple has gotten complicated as we’re going through a favorite color transition. While Cole was once staunchly a red and green man, and Evie a simple blue girl, now they’re all over the map. Which makes even getting started a nightmare. 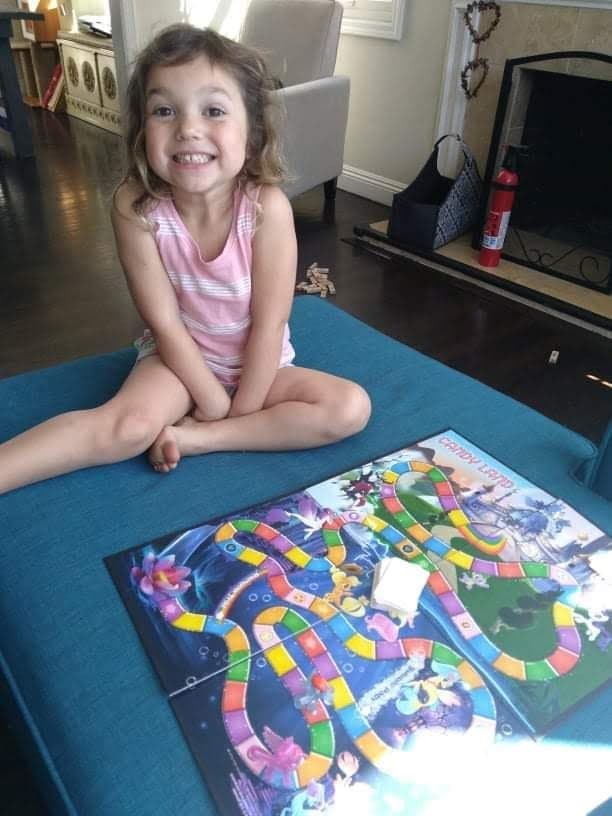 Then Evie knows that the rules say the youngest player goes first – a rule I’m sure she’ll be happy to bend once Izzie is old enough to join in – and taunts Cole endlessly about this. And God forbid you lose a turn or have to go back!?!

Let’s just say that Cole has embraced his inner Teresa Guidice on more than one occasion and flipped the board. Before you think my kids just are sore losers – they’re not. It’s just something about this game makes them crazy. And Mommy too.

Candyland: the fun game where everyone gets to remind Mommy that she’s the oldest and has to go last.#momlife #CANDYLAND

Here’s how the living nightmare starts: “Mommy! Let’s play family! You can be the Mommy, and Cole, Izzie and me will be the babies!” Uh, that’s not called playing family, that’s actually our real life.

I Hate Playing Doctor’s Office with My Kids

A classic, but the bane of my existence. I am so opposed to playing doctor that I have forbidden anyone from buying my kids any doctors kits, no matter how cute they are. Every once in a while I’ll put one like this in my Amazon cart, thinking I’ll be a nice Mommy and suck it up because I know my kids would LOVE it. 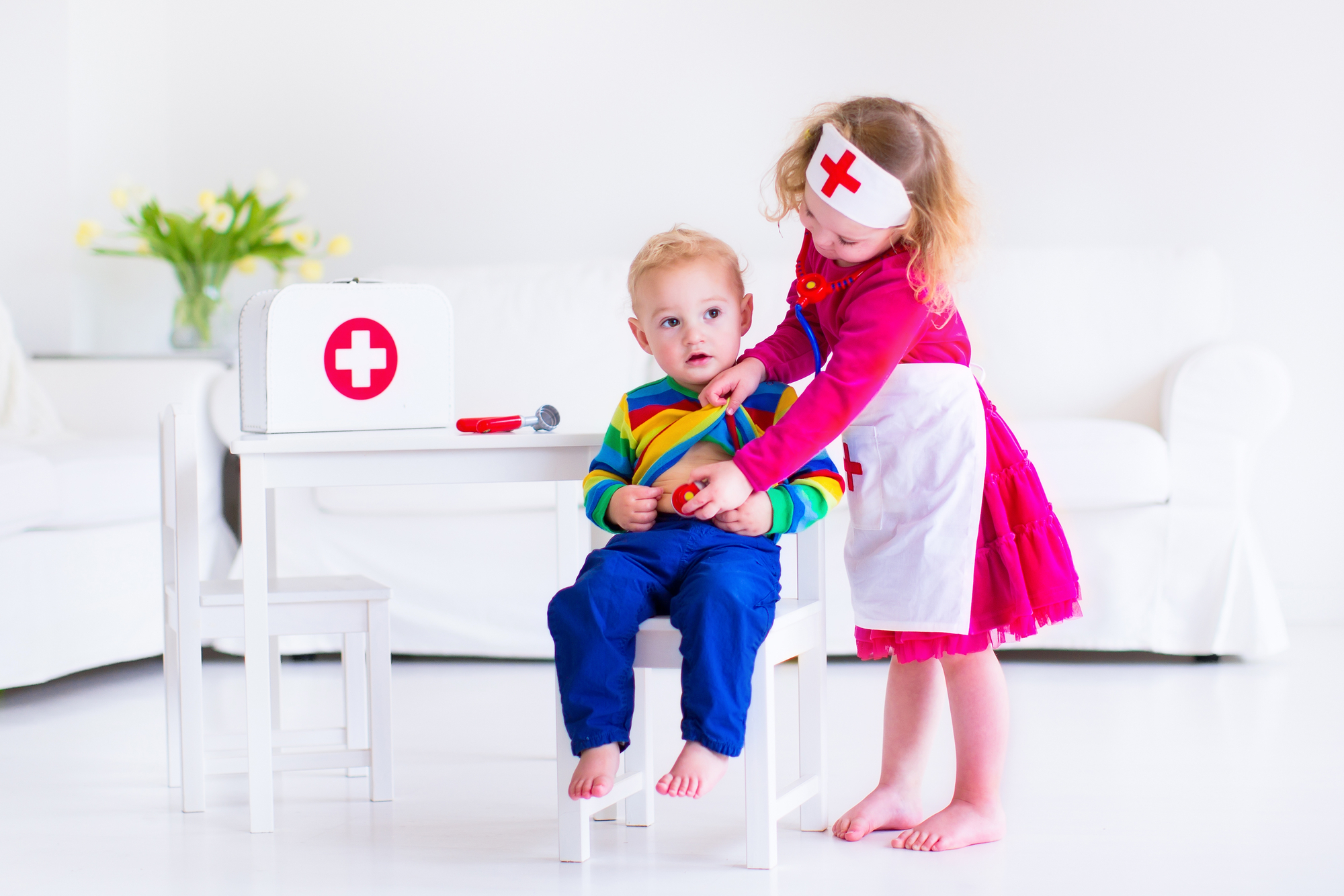 But then I think about how they’re going to want to poke me and prod me and listen to me and cover me in band aids and I come quickly to my senses.

And lest any of you think it would be HILARIOUS to have one show up on my front porch one day? Know that you will have done an exceedingly good deed when said doctor’s kit is delivered to Toys for Tots.

I Hate Playing Play Doh with My Kids

I generally suck this one up in the name of arts and crafts, and I always feel like I did a good deed by getting out a thousand little yellow tubs, but it’s no secret I hate Play Doh. 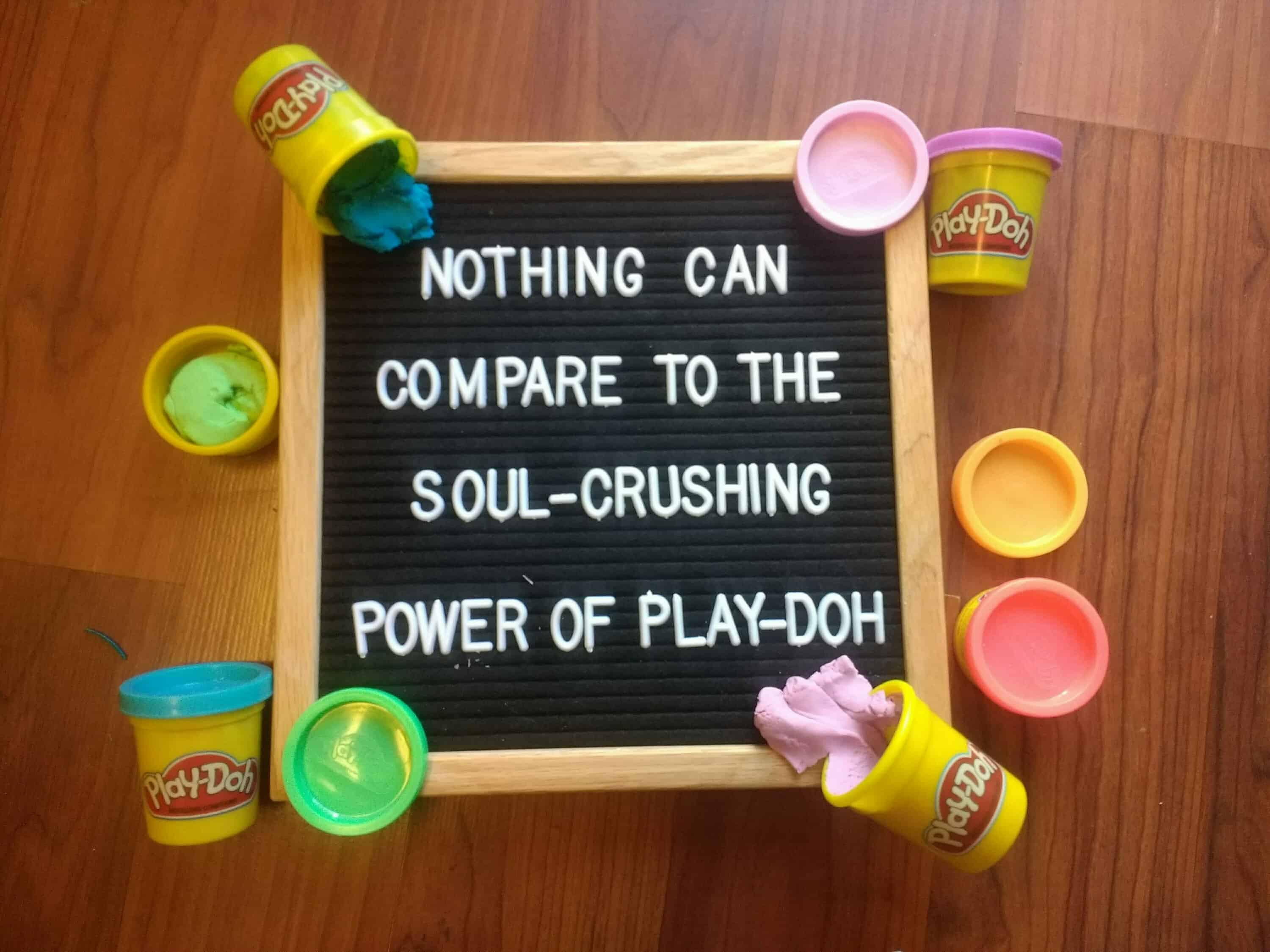 Or maybe I just don’t like being told to make a bridge for trains out of stuff that has absolutely no chance of success and then being the monster when I inevitably fail.

I Hate Playing Dinosaurs with My Kids

I hate roaring. I hate stomping. And I hate getting totally schooled by my 4 year old on the different kinds of dinosaurs, when they lived, what they eat, and every aspect of dinosaur life. (Thanks Dinosaur Train). 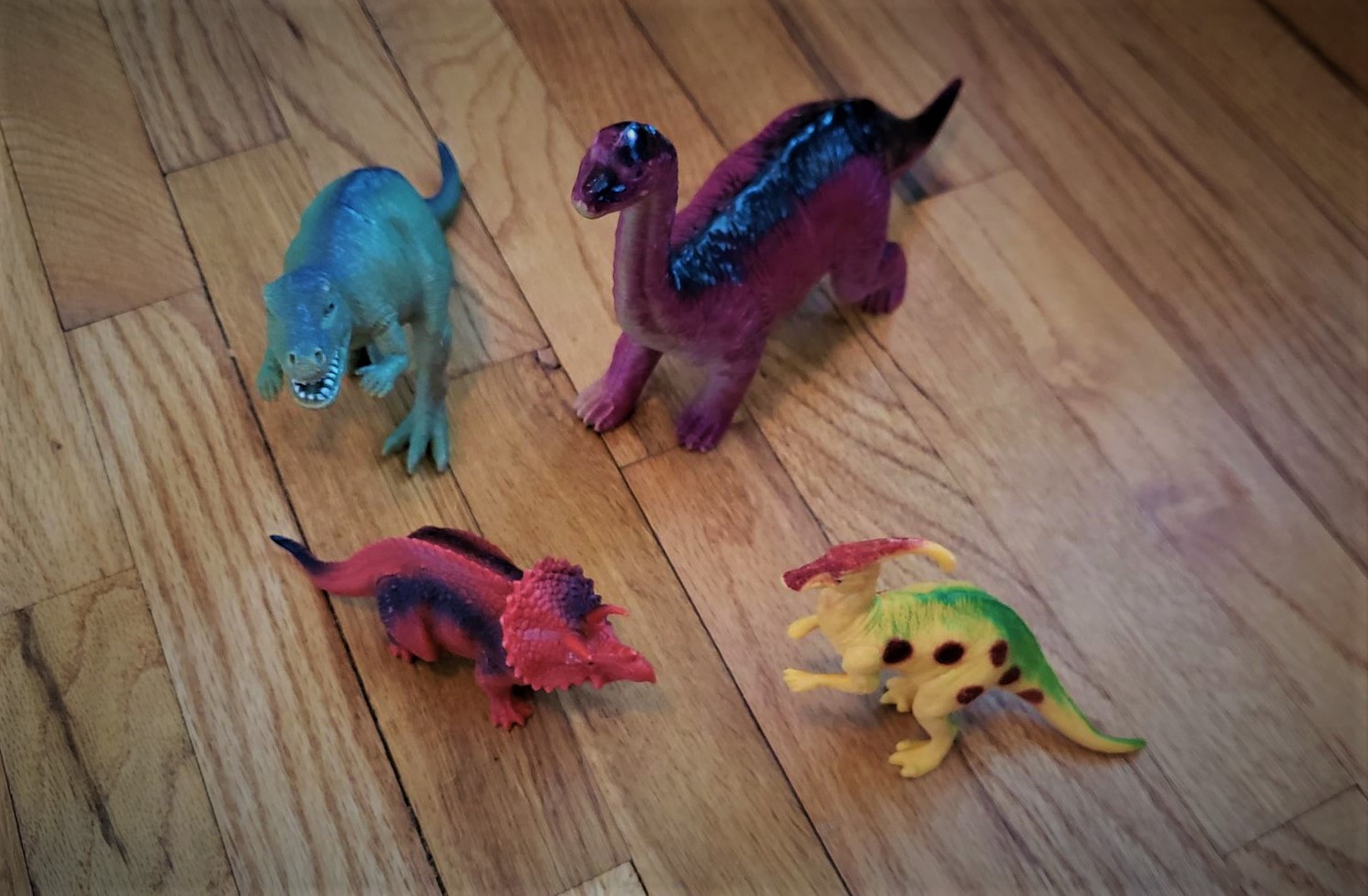 Then he’ll want the dinosaurs to have a conversation and I’ll think, well, at least all those years of being a high school drama nerd will pay off! But no, I can’t even improv what my dinos say because there’s a solid script in Cole’s mind and he will be feeding me lines and telling me my delivery is wrong too.

And look, we may talk smack about the games we hate playing with our kids. But as much as I hate playing pretend with my kids, I still do it every once in a while. That’s what moms do, after all.

Need a little more Mommy Humor? Check out these other hilarious posts! 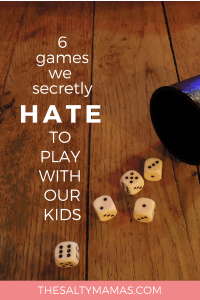 6 thoughts on “6 Games I Hate Playing with My Kids”