Look, if you’re a parent, odds are…your kids are crying. Maybe a lot. But you’re not alon! Laugh along with the parents of Twitter and they’re always-crying kids.

If you have kids, you are NO stranger to all the crazy reasons that they’ll throw a fit. And yet, no matter how many tantrums you’ve witnessed, you’ll never stop being amazed at the things kids can freak out over.

So we scoured Twitter for some of the funniest, craziest, most ludicrous reasons kids cry. Then, we asked our followers – Why did your kids cry? 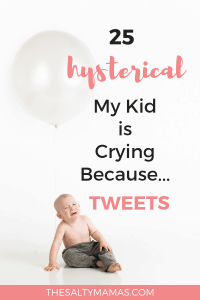 Here’s what they told us!

#reasonmykidiscrying — the ketchup is too red. #dadlife #parenting #parenthood #fatherhood

My toddler is crying because I opened a Band-aid.

That she climbed onto a counter & into a cupboard to get.

Then brought to me & told me she needed the Band-Aid for her owie.

Which she then pointed out.

But apparently did not want me to actually open or use said Band-Aid.

my toddler is hysterically crying & mad at me because her spoon, that she’s eating oatmeal with, has oatmeal on it …………….

Because I thought he was blowing kisses at me but they were meant for his reflection and I stole them.

My 3yo is crying because I can’t draw thunder.#momlife #dadlife #reasonsmykidiscrying

Why my daughter is crying: She left her imaginary dog at the grocery store and I won’t go back to get it.

Just kidding. I totally went back for it.

Because I wouldn’t let him lick my laptop!

Because the water he wanted went down the drain and he wants that specific drop of water, no other will do, and why won’t the drain give it back.

My 2yo is crying because I won’t let her eat yogurt with chopsticks. #momlife #toddlerlife #terribletwos #icanteven #ineedcoffee #kids pic.twitter.com/gmtDCTn6g4

My toddler is crying because I won’t take her trick or treating in the middle of April. #toddlerlife #parentlife #momlife

Why is my kid crying at Disney World? Because I said Nemo was a clownfish. #BadMom #TerribleParent

Reason My Kid Is Crying: Because she farted and scared herself awake. pic.twitter.com/etSdljLKe7

Reasons my kid is crying…
Because the lions on the tv won’t jump out and play with him the way kitty does. ? ?

My 2yo is crying because I won’t let her hold a burning candle and earlier she cried because I wouldn’t let her use a gluestick as chapstick and I wish I could ask the lady from the drugstore if these are the moments I’m supposed to be enjoying every minute of.

My toddler screamed because he saw me naked.

Thanks for the confidence boost, buddy. #whymykidiscrying

My 5 year old is crying because “kid” is not a palindrome like “mom” and “dad,” and that’s not fair.

Now I’m crying and I need a margarita.

My 5yo accidentally said she wanted either 0 or 10 choc chips & when I called her out on her slip up and said “fine, you can have zero” She lost her shit & started bawling saying ” it was an accident, it was an accident daddy!”

My toddler cried because I showed her a picture of Mr. Bean.

Oh God, just remembered that one time he was crying because he (himself) was in his own spot in his bed and he wanted himself to move so that he’d have the spot.

Because he can’t wear his shoes AND his rain boots at the same time. In the bathtub.

My toddler is crying because she ran out of farts.#momlife #dadlife

And with that we leave you with this deep thought for your soul:

Now you need to go, cause your kid is probably crying. For no good reason.

What’s the weirdest thing your kid has cried over? We’d love to hear about it in the comments!

1 thought on “Most Hillarious “My Kid is Crying” Tweets”