Having kids is a big responsibility. You hold your tiny baby and think, “I’m going to teach you letters and numbers and colors, how to throw a ball and how to read” and it can feel overwhelming and exciting all at the same time. Kids are constantly learning and part of our job is to facilitate this amazing experience for them. And then they take off their pants in a Chick-fil-A and you realize you’ve been focusing on all the wrong things. And there’s a whole world out there of things you NEVER thought you’d actually have to teach your kids.

So here are seven things we learned the hard way that you absolutely MUST teach your kids. 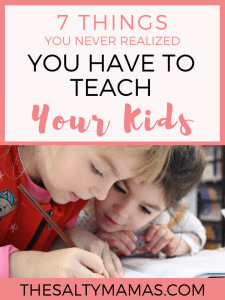 You Can’t Pee in Other People’s Yards

It was a hot and lazy summer day and Cole announced that he needed to pee. We were all too relaxed laying poolside and made the quick and easy decision to tell him to go pee on a tree in the backyard. First he looked unsure, then thrilled. How freeing and exciting! The rest of the summer was spent much the same, and Cole grew to love his “pee spot.” All was well.

Fast forward to the next year, on an equally hot and lazy day, and my son, dropping his pants in someone else’s backyard to do his business.

You Have to Wear Underpants EVERY DAY

This gem has struck BOTH of the Salty Mamas despite the fact that we put underpants on our kids every single day without fail. When our girls get themselves dressed, something makes them think, “This dress doesn’t REALLY need underpants, right?” Wrong Little Salties! It most definitely DOES need underpants! They don’t even let you into the YMCA kids club without shoes and here you’re trying to roll up Commando? Fortunately we’ve gotten creative and borrowed pants, found bathing suit bottoms in the car from swim lessons gone by, even made our big girls wear their younger siblings diapers to rectify this situation. But we suppose it would have just been easier if we had clearly taught them this rule from day one.

You know that thing where you say not so nice stuff about another person because you’re at home and you just need to get it off your chest and you know your partner isn’t going to go repeating it to anyone, especially the person you’re talking about? Yeah, kids don’t know that. You have to teach them very specifically that if you say something bad about another person they should not, under any circumstances, tell that person.

You Shouldn’t Throw Books at the TV

Yes, we’ve spent a lot of time reminding our kids not to throw balls at the TV. Our big mistake was leaving it there and not making it a blanket rule of “You don’t throw ANYTHING at the TV.” Fun fact, Little Blue Truck can do just as much damage as a baseball. Just ask Jaymi. Or her husband who had to run out to buy an emergency TV replacement.

This one seems obvious, but small children aren’t too keen on the obvious sometimes. They see water and think, that looks like fun. Unfortunately it’s usually after they’ve made the decision to jump that they realize swimming isn’t exactly a skill they’ve mastered. Obviously we’re with our kids whenever they’re by a pool, so no harm has come to any of the Salties, but they sure like startling the crap out of us.

And ruining some of our shoes that we’ve had to get soaking wet in order to, you know, save their lives. Evie still owes me a pair of Uggs from 2015, not that I’m keeping tabs on these things or anything.

I always expected that I may have to teach my kids some pretty gross stuff. Like not to pick their own nose. At least in public. And then cave and say if you really need to then at least go in the bathroom or something. I never really thought my kids would try to pick someone else’s nose. But then the baby had a booger. My son was trying to do her a solid, really. Well, that turned out to be a slippery slope. Fingers went up the noses of unwilling participants and we had to set a hard rule.

You absolutely never ever pick someone else’s nose.

Kids love observing things and then just saying those things out loud. Sometimes it’s cute, sometimes it’s funny, and sometimes it’s just awkward. Like when my son walked up to a guy in a fast food restaurant attached to a gas station and informed a man he was missing his leg. Fortunately, my son is adorable and has always been met with a positive response (yes, this has happened more than once) but we may not always be so lucky. So remind your kid to keep this observation to themselves.

The same can be applied to teeth.

Haven’t taught your kid any of these gems?? It’s okay, there’s still time. But I’d start now before you, like us, learn the hard way! What would you add that you never realized you’d be teaching your kid? 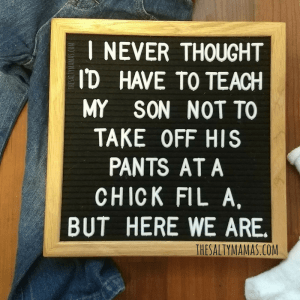 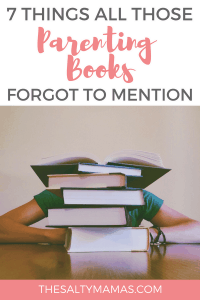