As I’ve mentioned, I love me some bujo (bullet journaling). And God bless Pinterest for giving me all kinds of awesome inspiration – it’s a FABULOUS resource when you’re looking for monthly or weekly spreads, list ideas and trackers, ALL the trackers! But I have noticed a serious lack of bullet journal spreads for Moms. So today I’ve got some tips for Moms that bujo and a couple page ideas I hope you’ll love!

Pick a weekly spread that is realistic.

I had to go through a few spreads before I found something that was functional for me, and that I could keep up with. Do not give up if you haven’t found yours yet. There is something for everyone – that’s one of the awesome things about bullet journaling. 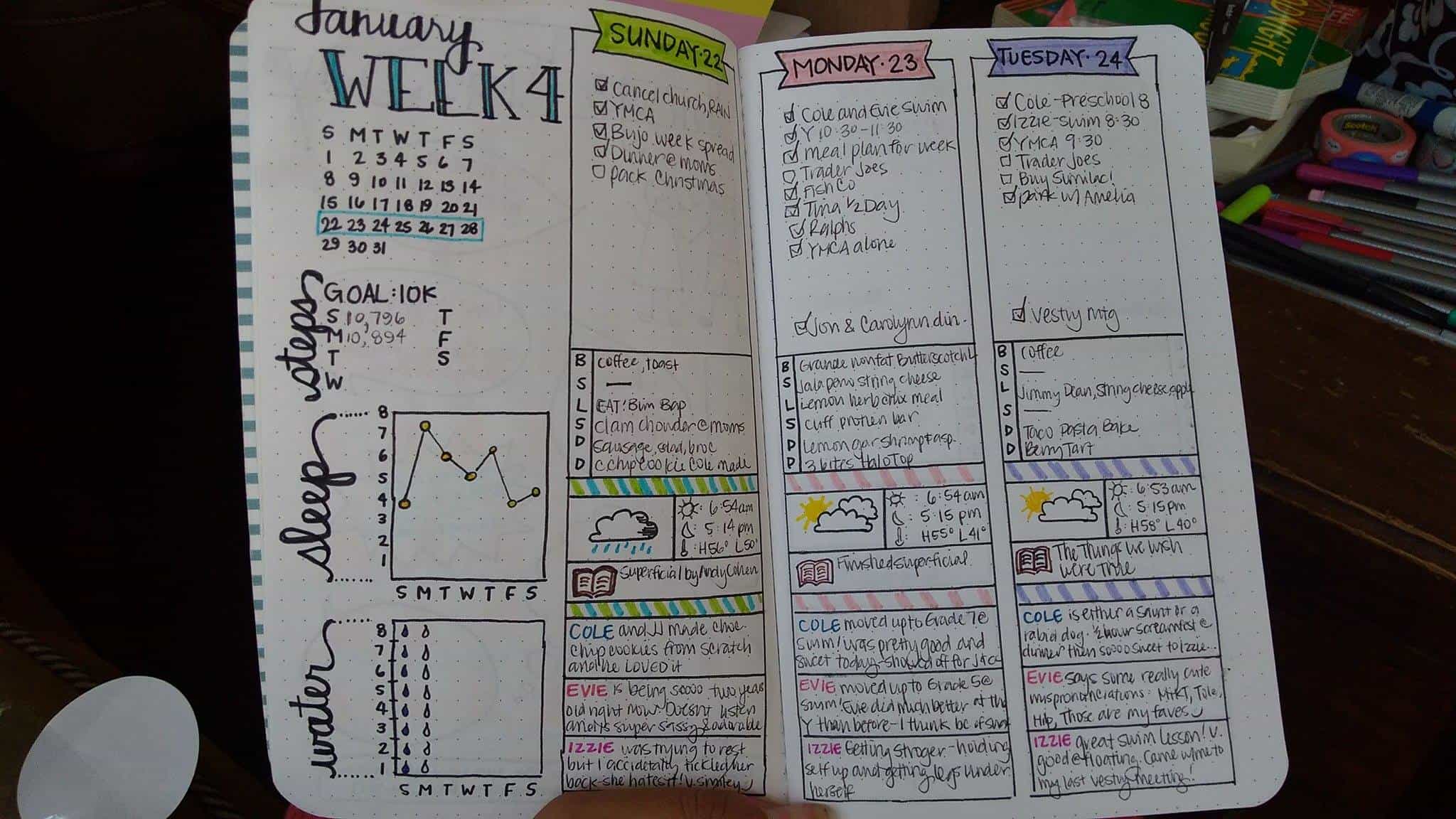 I started with this. Because it’s beautiful. And it’s got all the detail I could ever want in my life. I was gonna track my steps and my water and what I ate for every meal and snack and the WEATHER and I customized it a little so that I could have a cute little section at the bottom of each day to write something about each kid. Holy overkill, Batman. Check out how much I didn’t finish – and that was just the first three days. I fell off that one FAST. 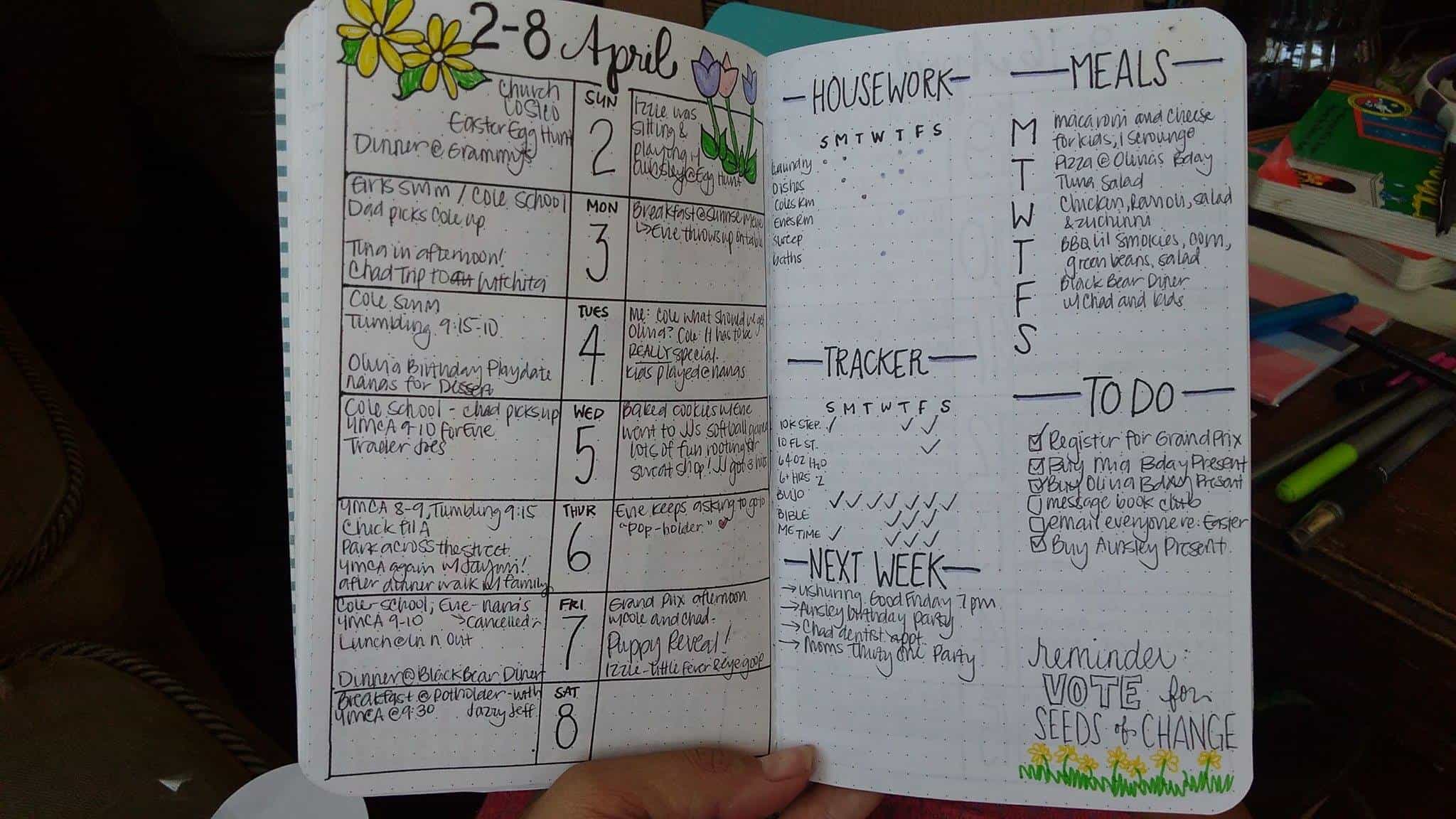 Then I tried this spread which little less info…I was only tracking one meal a day (better) I added some trackers for housework (for the record I did more than this, just didn’t track it) and health habits and then realized I hate daily trackers. I did like the little To-Do list and I thought it was an attractive layout, but after a few weeks I was over this one too. I still needed to simplify or this wasn’t going to be fun anymore. 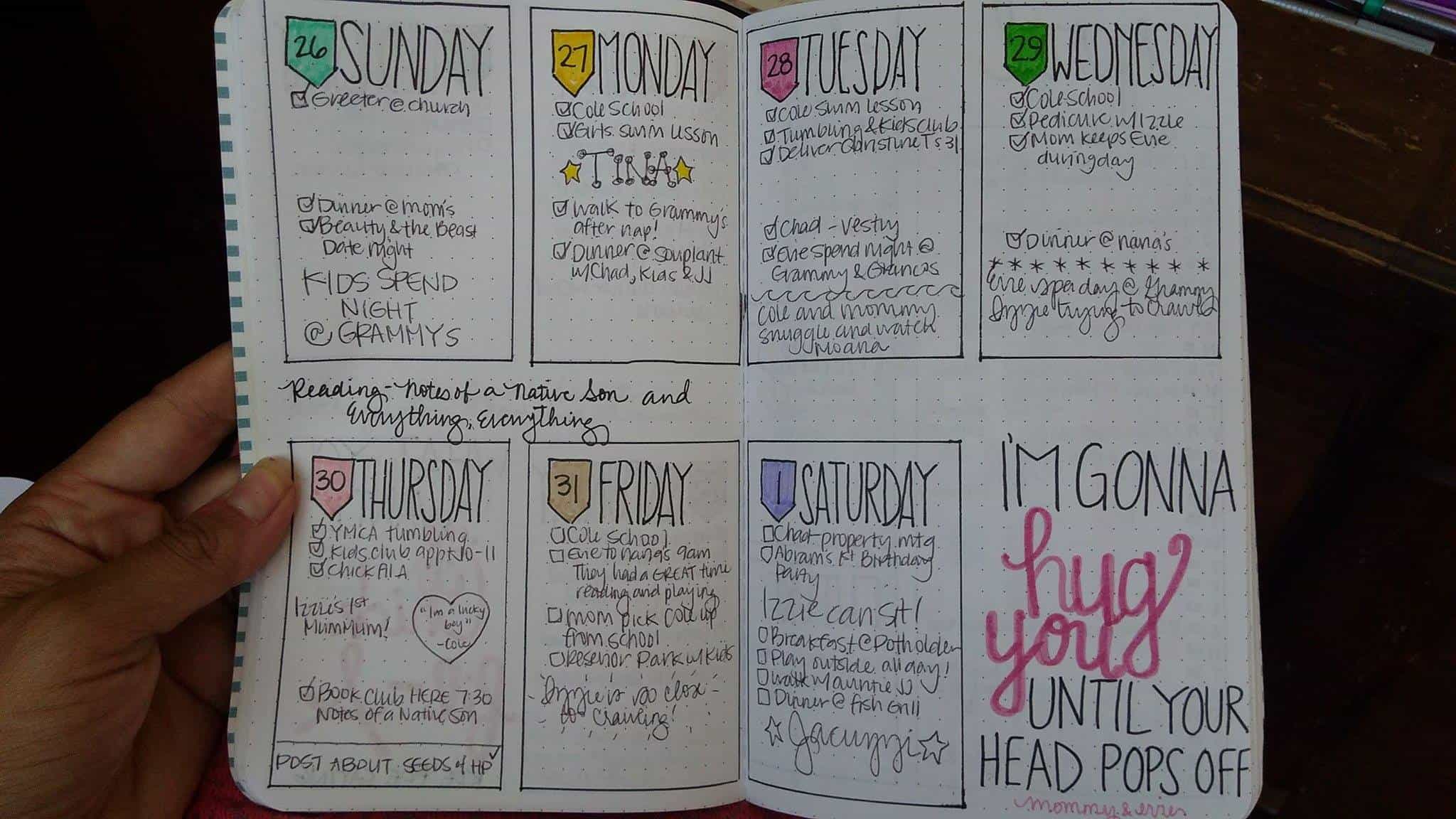 Then I went SIMPLE. And I LOVED it. Big ol’ blocks where I could write everything and a bonus space where I could add a family saying, something cute the kids did, etc. In the middle space I would write what I was reading, watching, anything over-arching for the week. I kept this spread up for a couple of months and then only switched it up for something different – but at least I’d found the kind of spread that works for me. Once you do, I promise it will improve your bujo satisfaction by like 500%.

With three kids, I have fallen off the baby book bandwagon. Hard. When I had two, I would say, “Cole was born at 10:56 in the morning. Evie was born at night.” With three? It got even worse. I did one of those Line a Day books with Cole that I kept up for like a year. With Evie I had little notes and post its and stuff in my pockets and purse and always was totally going to write them down somewhere permanent. With Izzie, I have just accepted that Facebook memories are going to remember for me. If Facebook shuts down I’m screwed.

Now I do often have a spot in my weekly spread to write a little something about each kid – whether daily or weekly. But it’s very open ended, and I know there are going to be a billion things I wish I remembered! So, inspired by Back to School printables with likes and dislikes and other kid info, I made a simple chart I can fill out for all the kids at the end of the month. Because like with the weekly spread style, I have to find a balance of what’s reasonable for me to commit to – and so far this feels good. I set it up at the beginning of the month so I can fill in as things happen or cram at the end. (Let’s face it – I cram at the end!) 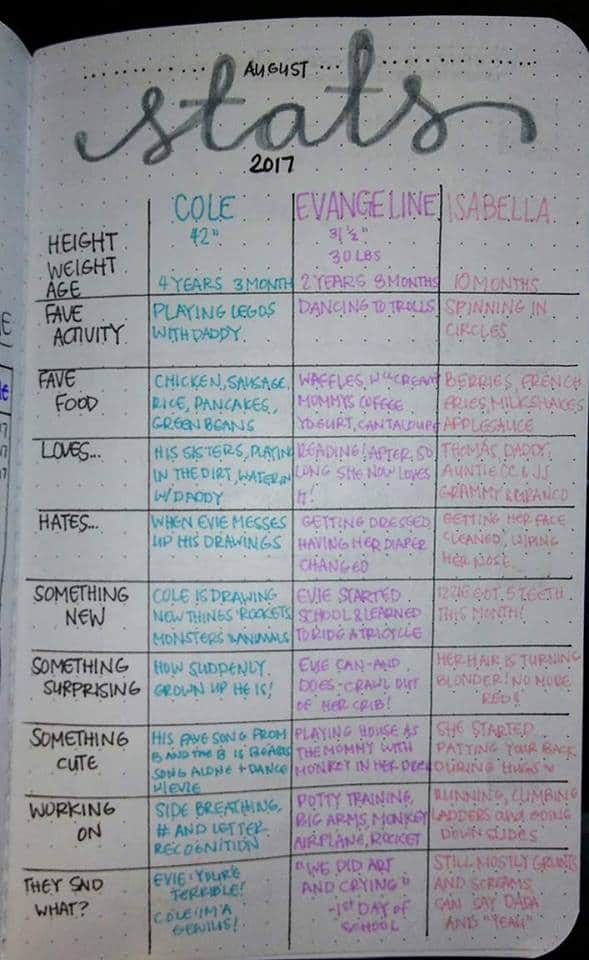 How to Measure Which Kid is Your Favorite

Okay at the risk of tooting my own horn (toot! toot!) this is probably my favorite thing I’ve ever bujo’d. I was in a dark place with my baby’s sleep patterns. She was up. all. night. And then the other ones were getting up so early. (Or at least it felt early at the time). I felt like I had to channel my frustration with her into something tangible. 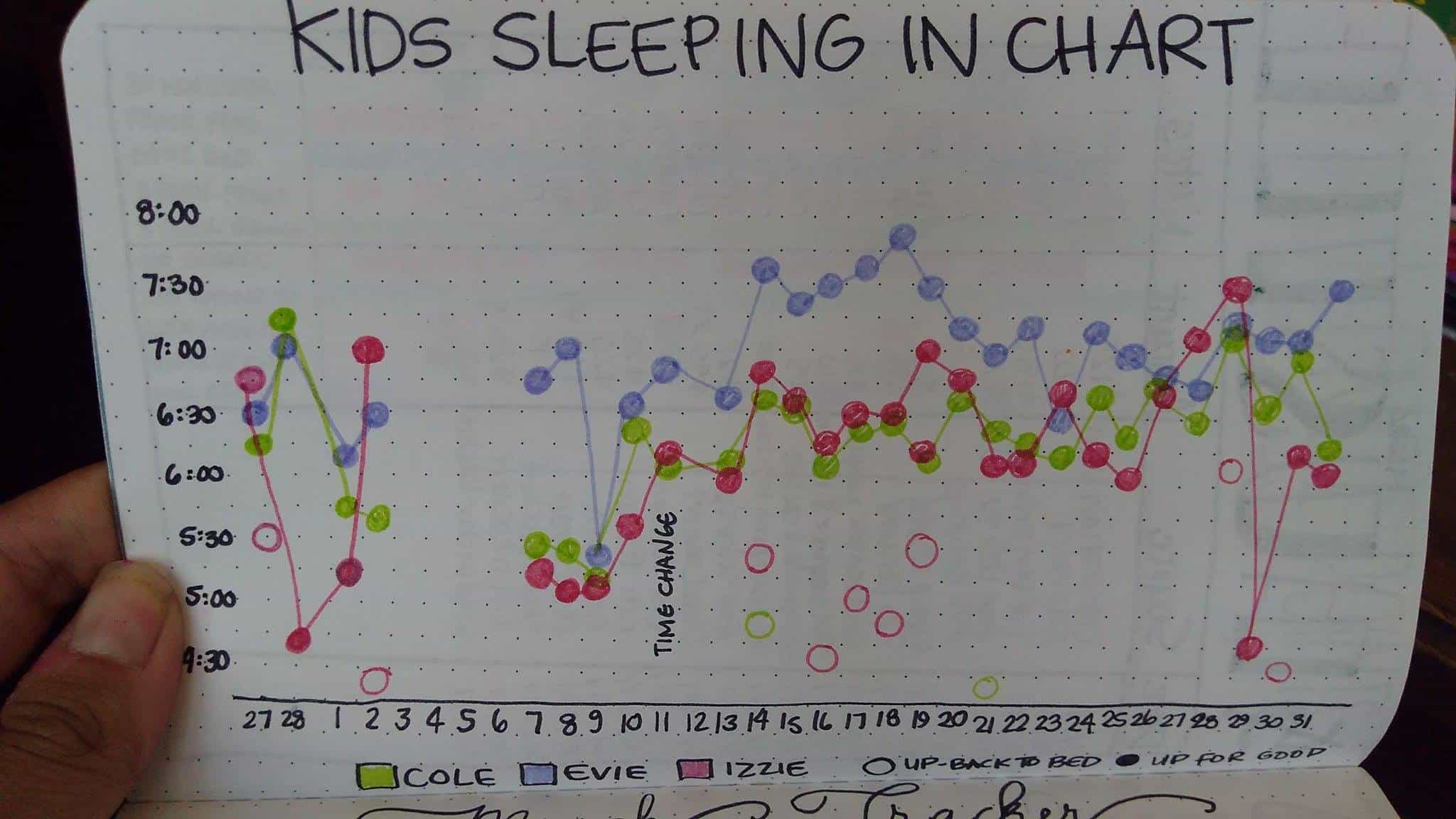 As you can see, Evie, my little lavender dot, was clearly my favorite child that month. It was neck and neck for Cole and Izzie for a while, but Izzie had those God Awful open circles (which means she woke up but I eventually got her back to sleep). It was a silly chart, but the kids and I had fun doing it – every morning they would help get their colors and watch when I put their dots. Evie will still find the page and point to hers and say, “That’s me Mama?” Yep, my lovely little sleeper, that’s. you.

The cruel irony is that when I made that page – I thought the kids were getting up early. But these days they mostly get up in the 5:00 hour…..so I’m thinking it might be time to figure out which one’s my favorite again 😉 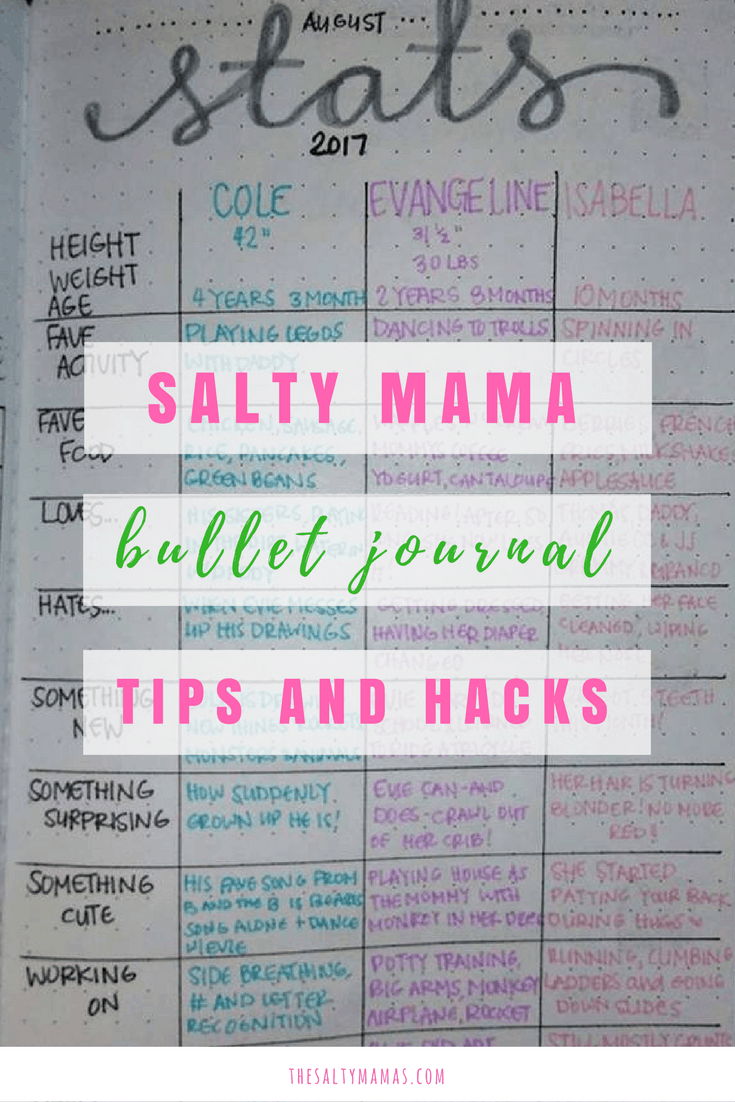 What kind of bullet journal spreads would you love to see to help you as a Mom?

34 thoughts on “Bujo to Pick Your Favorite Kid”