The internet has educated us on some important do’s and don’ts for the Nosy Nelly’s of the world. We know you don’t get to ask people when they’re having kids or if they’re having kids at all. We’ve established that you don’t get to ask people why they’re only having one kid. We’ve hammered home to not ask pushy questions about when people are adding to their family. Granted, some people will ask despite knowing all this, because they’re just those kinds of people.

But what if you’re the family that got married and had kids a year later. And then got pregnant again 9 months after that. And then got pregnant 12 months after that. And then decided that you’re actually not done having kids even though in my experience three seems to be the assumed maximum number of children a person should have. Because that’s our family. We’ve got three an we don’t plan on being done. Maybe we’ll have one more, maybe two, maybe my husband suggests three and I freak out and say “Don’t push it bro.”

But that family, my family, well guess what internet? You don’t get to ask that Mom really personal questions either. So here’s my list of actual questions I’ve been asked by strangers.

Oh, and the answers I wish I had said.

(Okay, sometimes I did say them….) 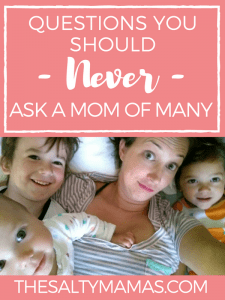 And I only have three. That are all little. And look alike. So I don’t get gems like “Do they all have the same father?” like some of my friends do. So please, if you see a Mom with more than three kids, know that it’s not contagious. She’s not some freak of nature. She has her reasons. But they’re her business, and none of yours. 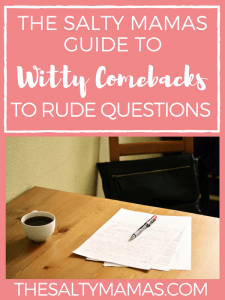 7 thoughts on “Questions You Shouldn’t Ask Moms of Many”