We live in a fast paced world where there are opportunities around every corner. And we’re supposed to say, “YES!.” I mean, it’s the age of #YOLO and #NoRegrets. It’s a time when we’re supposed to grab the bull by the horns and when Andy Cohen asks you if you regret anything you said or did this season you can proudly say “I don’t believe in regrets.” (I’m looking at you Luann). But me? I’m sitting over here being a medical test dummy for my 3 year old and thinking how I absolutely should not have let her get the Doc McStuffins kit for pooping in the potty. Sure, I could try to brush it off as a “learning experience” but we’d rather go back in time and prevent the thermometer wet willy I just got from ever happening. That, and these other 99 things. 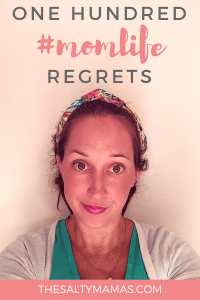 Because despite all these regrets, I love my kids, I (usually) love my life, and yes, I learned from allllllll those mistakes. Next time I’m super-sizing, signing my kid up for summer camp the day registration opens and getting that epidural dammit!

What do you regret?